Aim: Primary lung cancer is the leading cause of human cancer deaths worldwide, and squamous cell carcinoma (SCC) is one of the most frequent histologic subtypes. The aim of our study was to analyze clinical factors potentially affecting the overall outcome of advanced lung SCC patients.

Methods: A series of 72 consecutive patients with advanced SCC undergoing chemotherapy at our institution between January 2007 and July 2013 were eligible for our analysis.

Results: By univariate analysis, a better overall survival (OS) was related to response to first-line chemotherapy: median OS were 19.7 vs. 7.17 months, respectively, for responders and nonresponders patients (P < 0.0001). Eastern Cooperative Oncology Group performance status, gender, and surgery were other prognostic factors. No significant relationship between OS and smoking status, age, body mass index, or type of treatment was found. In the third-line setting, a better OS was associated with objective response to second-line treatment (P = 0.015).

Conclusion: Our results suggest that differences in OS seem strictly associated with clinical response to previous treatments. These data should be considered in the therapeutic strategy and management of patients with SCC of the lung.

Squamous cell carcinoma (SCC) represents 25-30% of all non-small cell lung cancer (NSCLC).[1] It is due to the transformation of bronchial epithelium caused primarily by cigarette smoking and shows a remarkable dose-dependence with it. Typically, SCC originates in bronchial airways, in particular, those proximal and of medium caliber while adenocarcinoma (ADC) occurs in about 50% of cases and is localized to bronchi of smaller diameter. ADC is the most frequent histological type in nonsmokers, and its pathogenesis differs from SCC.

In general, SCC tends to be locally aggressive with metastasis to distant organs occurring less frequently than in ADC. New treatment options for ADC underline the need for mandatory subtyping.[2] In particular, mutations in the epidermal growth factor receptor (EGFR) kinase, as well as fusions involving anaplastic lymphoma kinase (ALK), have led to a remarkable improvement in personalized therapy for ADC.[3,4] Unfortunately, activating mutations in EGFR and ALK fusions are typically absent in SCC,[5] and targeted agents developed for ADC are largely ineffective against SCC. The aim of our study was to analyze clinical factors potentially affecting the outcome of advanced SCC in clinical practice. This was done to identify criteria that can help physicians to select the best treatment strategy in their clinical settings.

The statistical association between categorical variables and clinical outcome was assessed with a Chi-square test. We used Kaplan-Meier analysis to measure survival distribution. Tested variables included sex (male vs. female), age (> 65 vs. ≤ 65), ECOG PS (0 vs. ≥ 1), BMI (< 25 vs. 25-29.9 vs. ≥ 30), smoking status (never smoker vs. smoker/ former smoker), stage (III vs. IV), surgery (surgery vs. not surgery), radiotherapy (radiotherapy vs. not radiotherapy), type of chemotherapy (two-drug chemotherapy regimens including platinum and gemcitabine vs. gemcitabine alone vs. docetaxel vs. others), response to first and second-line chemotherapy (responders vs. nonresponders). Cox multiple regression analysis was used to assess the role of those variables resulting in significance by univariate analysis. Overall survival (OS) was defined as interval between start of chemotherapy to death or last follow-up visit. Progression-free survival (PFS) was defined as interval between start of treatment to clinical progression or death or last follow-up visit if not having disease progression. Significant differences in probability of surviving between strata were evaluated by log-rank test. A significance level of 0.05 was chosen to assess statistical significance. Statistical analyses were performed using MedCalc version v9.4.2.0 (MedCalc Software, Broekstraat 52, 9030 Mariakerke, Belgium). 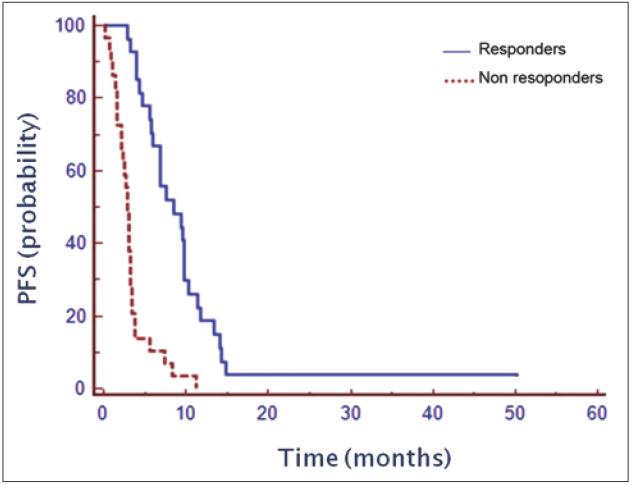 These variables, with the exception of PS, maintained statistical significance even by multivariate analysis and proved to independently affect the outcome: sex (P = 0.019), surgery (P = 0.036), response to first-line therapy (P < 0.0001). Thirty patients (42%) received chemotherapy as second-line therapy. Median OS in this group was 6.43 months (range: 0.6-54.4), with PFS of 3.1 months (range: 0.4-51.4). Moreover, in the second-line setting, better OS was associated with response to previous chemotherapy (P = 0.015): median OS 18.77 and 5.83 months for responders and nonresponders, respectively [Figure 3]. A significant impact in terms of different PFS was seen as a function of response to second-line therapy (5.9 vs. 2.7 months, P = 0.007). Finally, only 11 patients received third-line chemotherapy. 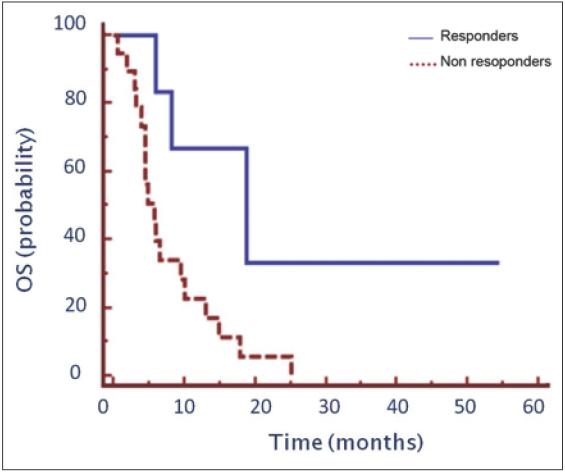 Genomic alterations in SCC of the lung have not been comprehensively characterized, and molecular targeted therapies have mainly shown no efficacy. To date, the most important molecular and therapeutic achievements in advanced NSCLC have been mostly confined to patients with nonsquamous histology. However, recent research is focusing on identifying potential driver mutations affecting SCC patients.[6,7] In a recent large phase III trial, necitumumab added to cisplatin and gemcitabine as first-line treatment increased survival in patients with advanced SCC.[8,9] Nevertheless, at present, the standard frontline treatment remains exclusively chemotherapy. For patients with locally advanced or metastatic SCC, two-drug chemotherapy regimens (including cisplatin or carboplatin and a third-generation agent, such as gemcitabine, taxanes, or vinorelbine) currently remain the standard of treatment options.[10] A single agent (mainly docetaxel) is the preferred treatment in second-line setting.[11]

In our study, we analyzed clinical factors potentially influencing the overall outcome of patients with advanced lung SCC to identify a population of patients likely to benefit from chemotherapy with a prolonged life expectancy. Previous publications have suggested various prognostic factors involved in advanced NSCLC using heterogeneous patient populations.[12-15] In a recent study, 245 patients were analyzed with the aim of evaluating factors associated with long-term survival (> 2 years) in patients with advanced NSCLC. Fifty-two patients (21%) had SCC. Six prognostic factors were identified: PS of 0-1 at first tumor progression, normal lactate dehydrogenase levels at diagnosis, use of maintenance therapy, surgical resection, time to progression of > 3 months, and number of chemotherapy agents received.[13] Conversely, our study showed that a better PS at diagnosis was significantly associated with a better OS. In another large report, FLEX[15] investigated the prognostic significance of baseline characteristics and showed that age, gender, PS, smoking status, tumor histology, and number of involved organs were independent factors of prognostic value. Interestingly, in our analysis, those factors did not show an impact on outcome while response to first-line chemotherapy was the major determinant for OS. A previous retrospective study evaluated the impact of first-line chemotherapy on results of second-line chemotherapy, using data from a large phase III study. One hundred and seventy-one (30%) of 571 patients had SCC. The study showed that gender, histology, stage at diagnosis, PS at the beginning of second-line therapy, and best response to initial therapy were associated with survival outcome. In particular, median survival was 15.8 months in cases of CR/PR, 10.5 months in cases of SD and 4.6 months for PD (P < 0.001).[16]

In advanced colorectal cancer, it has been shown that patients eventually receiving all available drugs have a better OS.[17] Similarly, in our study, patients responding to first-line chemotherapy had better OS and for those patients, receiving second-line therapy to maximize OS seemed important. Overall, despite heterogeneous treatment characteristics, our findings seem to indicate that SCC patients who responded to therapy may most benefit from additional treatments and this result could be relevant for the decision making process and the therapeutic strategy.

In conclusion, response to first-line and second-line treatments seems to have a significant prognostic impact in SCC. These observations should be considered relevant for the management of such patients, although further studies also based on biological markers are essential to better understand the prognostic factors in this population. 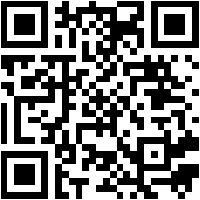