Spinal intradural mature teratomas are rarely encountered in adults. In this report, one of the oldest patients ever reported to harbor an intradural mature teratoma of the conus medullaris is presented, and the relevant literature concerning the teratoma’s origin, clinical presentation, radiological features, and treatment modalities is reviewed. A previously healthy 70-year-old woman presented with a 2-month history of left sciatica. Her neurological examination was normal and the magnetic resonance imaging of the thoracolumbar spine showed an intradural, partially cystic mass extending from T12 to L3 level. The patient underwent a T11-L4 laminectomy. After opening the dura, a yellowish vascular tumor attached to the conus medullaris came into view. Meticulous dissection allowed for subtotal tumor removal. Only a thin part of the tumor wall, tightly attached to the conus medullaris, was left. The tumor was diagnosed as mature teratoma by histological study, and no adjunctive therapy was administered. The pain experienced by the patient disappeared postoperatively. Her condition remained unchanged with no radiological recurrence through the most recent follow-up examination, 3 years after surgery. The present study outlines that mature teratoma can arise from the conus medullaris, even in older adult patients. Functional preservation is of utmost importance, and long-term follow-up is mandatory to spot recurrences early.

In 1863, an unprecedented finding, Rudolf Virchow described the “Krankenhaften Geschwülst,” an intraspinal “monstrous tumor” better known today as teratoma. One hundred and fifty years later, the origin, natural history, and occurrence of teratoma in elderly individuals are still subjects of debate. Spinal teratoma is, in fact, an extremely rare entity representing only 0.1-0.6% of all spinal tumors[1] and mainly diagnosed during the first two decades of life. With only 31 described cases, adult forms are most uncommon. This report contributes to the understanding of these rare tumors by presenting an exceptional case of a conus medullaris mature teratoma in a 70-year-old woman and reviewing the relevant literature concerning its origin, clinical characteristics, radiological features, and treatment modalities.

A previously healthy 70-year-old woman presented to our department in July 2011 with a 2-month history of left sciatica, with progressive aggravation. On admission, her neurological examination was unremarkable and the physical examination including detailed clinical examination of the trunk and the extremities, did not find any patchy area of abnormal hair or dimple on her back. Anteroposterior and lateral radiographs were normal, and spinal magnetic resonance imaging confirmed the presence of a partially cystic and enhancing intradural lesion extending from T12 to L3 level [Figure 1]. 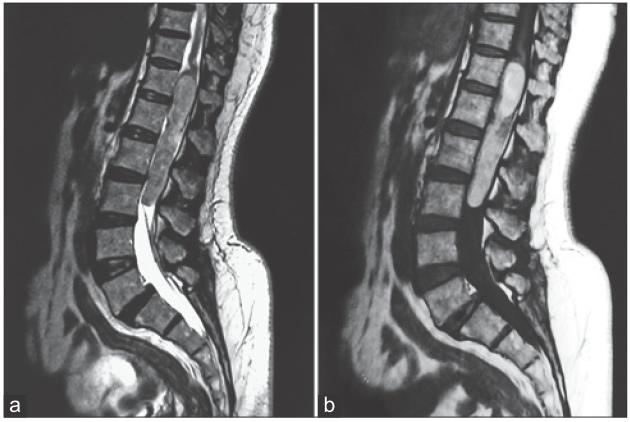 A T12-L4 laminectomy was performed. The dura was opened in the midline, and a yellowish, vascular tumor came into view. The tumor originated from the conus medullaris and developed freely between the nerve roots. Fatty substance was present outside the tumor, and mucous substance, bony fragments, and hair were found inside the tumor.

Curettage of the cystic content was performed and progressive dissection allowed for a subtotal resection. A thin rim of the capsule that was tightly adherent to the conus medullaris was left. This was considered safer than performing a radical resection that would probably lead to a severe neurological deficit. The patient improved remarkably postoperatively. Her pain disappeared immediately. Histological examination showed a large number of glandular formations covered by mature, prismatic, and flattened cubic epithelial cells. These structures were embedded between fibrovascular tissue and mature fat tissue, which included some cystic formations. Three germ cell layers (including ectodermal, mesodermal, and endodermal elements) were observed, and the final histological diagnosis was mature teratoma [Figure 2]. No adjunctive therapy was administered. The patient has shown no clinical or radiological sign of progression through the most recent follow-up examination, 3 years after surgery [Figure 3]. 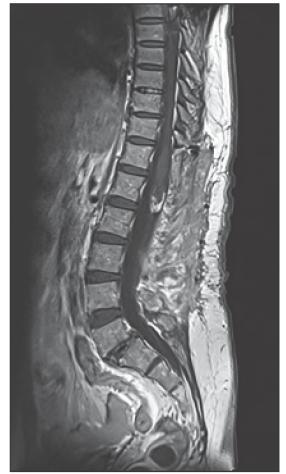 Teratoma is one of the rarest intraspinal neoplasms, representing 0.1-0.6% of all spinal tumors.[1] It typically affects young individuals in their first or second decade of life and is frequently associated with spinal dysraphic defects. Adult cases are exceptional. Their rarity and the use of various terms to describe them led to limitations in understanding of the disorder and speculation about their true origin and natural history. We searched the PubMed and Medline databases for adult intradural mature teratomas and present here a comprehensive review of the literature concerning these rare tumors.

The total number of adult spinal intradural mature teratomas reported to date is 31. They are summarized in [Table 1]. The mean age at presentation was 36 years in men and 44 years in women, with a slight female predominance (sex ratio: 0.8). These lesions were predominantly located in the lower thoracic and thoracolumbar spine. Only five cases of conus medullaris mature teratoma were reported.[14-16,26,27]

The review indicates that, in sharp contrast to pediatric cases, adult cases typically presented with subtle, nonspecific symptoms like back pain or radiculopathy. Furthermore, although these patients commonly experienced a certain degree of neurological disorder, motor weakness was not always obvious.[30,31] Associated dysraphism, commonly seen in young patients, was found in only 6 adult patients (19%).[3,5,13,14,21,22]

Radiologically, displaced pedicles, erosions, thinned laminae or calcifications on conventional X-rays are of significance and should be followed by a more extensive investigation.[21] However, as demonstrated in this case, these findings are not always present. Computed tomography provides an optimal assessment of bony structures, but it is of limited interest for the exploration of the spinal cord and the extent of the tumor.

Magnetic resonance imaging is regarded as the gold standard imaging technique because it best delineates the tumor characteristics and depicts the degree of spinal cord involvement. The morphological presentation varies according to the location of the tumor. Intradural teratomas are commonly oval or lobulated, heterogeneous masses. Cystic components are usually found in adult cases, which can lead to confusion with more common epidermoid and dermoid cysts.[17]

In the present case, a well-demarcated and strongly enhancing tumor was found, compounding the diagnostic challenges and highlighting the unspecific radiological aspect of spinal mature teratomas in elderly individuals. From the histological point of view, Russel and Rubinstein[32] describe teratomas as tumors that contain a mixture of the three germinal layers of ectoderm, endoderm, and mesoderm. The review of the literature revealed that in a number of cases, only two of the three germinal layers were observable, perhaps because the derivatives of one or two of the layers may overgrow others.[10,19] Spinal mature teratomas do not differ from extragonadal ones and are composed exclusively of fully differentiated “adult type” tissue elements. Because their capsule typically adheres to the spinal cord, radical removal carries a high risk of neurological deficits.

The pathogenesis of spinal intradural teratomas is still a subject of debate. The two widely held theories regarding the origin of intraspinal teratomas are the misplacement germ cell theory and the dysembryogenic theory.[7,16] The traditional theory is the misplacement germ cell theory. It suggests that certain pluripotent primordial germ cells of the neural tube are misplaced during their migration to the gonadal ridges from the primitive yolk sac, resulting in spinal teratoma formation.[7] In our situation, there is enough evidence to support the rationale of this theory, since we found that only 16% of adult cases were associated with spinal dysraphism[16,21,26] and that the lower thoracic vertebrae and the conus medullaris region, which are adjacent to the caudal cell mass, represent the most common locations in adult population.

The alternative explanation comes from the dysembryogenic theory. This theory indicates that spinal teratomas arise from pluripotent cells which, in a locally disturbed developmental environment like a primitive streak or a caudal cell mass, differentiate chaotically, and create spinal teratoma.[33] The dysraphic malformations and the occurrence of a neurenteric cyst without dysraphism[34] support this theory, and the tridermal anomaly, under such considerations, represents the primary event that will further affect the spinal closure.[33]

The indications for surgery in an adult with intraspinal mature teratoma are controversial. Radical resection should be the goal in symptomatic cases with radicular pain and/or progressive signs due to mass effect or cord tethering.[17] On the other hand, asymptomatic patients and those having longstanding minor and stable neurological deficits may be treated conservatively, because prophylactic surgery can be associated with a high surgical risk in adult patients with no growing or very slow-growing lesions.

Some authors advise the removal of the capsule as a potential source of regrowth.[35] However, an epidemiological study guided by Allsopp et al.[36] showed that recurrence rates for complete and gross resection were extremely similar (9% and 11%, respectively). Many authors no longer recommend radical resection as a preferred management policy for all cases,[19,20] since the rate of adherence to the cord reaches 50% in this region, and any attempt at total resection may result in inadvertent damage to the conus.[10] In the present case, complete resection was not feasible without potential injury of the conus medullaris, so it was judged safer to realize a gross total resection in order to preserve nerve integrity.

Due to the extremely low incidence of adult mature spinal teratoma and limited knowledge of this disease, there is little evidence to support the use of adjunctive therapies.[36] Radiation therapy is not justified since mature teratomas are benign tumors, and the efficacy of chemotherapy has not been demonstrated.[36] Given the slow-growing nature of these tumors, patients will require serial clinical and radiological follow-up examinations for several years. Tumor markers such as B human chorionic hormone and alpha fetoproteinare of little interest in the follow-up of patients operated for mature intraspinal teratomas since a recurrence can take place from nonsecreting parts of the tumor.[36]

In conclusion, mature intradural teratomas in adults are rare, with few accompanying spinal anomalies. Their location in the conus medullaris is exceptional and can present with sciatica. Although complete resection is the primary goal, subtotal removal can be considered as a safe and effective option to manage these lesions, with the understanding that a small number of these patients may need reoperation. Long-term follow-up is mandatory.

Quantities of Citations Each Year

* All the data come from Crossref 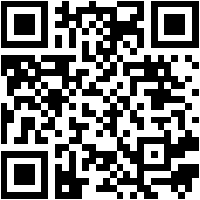