Primary malignant melanoma of the spinal cord: a case report

Primary malignant melanoma of the central nervous system is rare, and the events involving the spinal cord are even more infrequent. A 30-year-old male presented with a mass lesion of the spinal cord. After radiological workup, the mass was resected in December 2012. The histopathological examination report and immunohistochemistry suggested malignant melanoma. PET-CT scan, brain MRI, and funduscopic examination did not reveal malignant melanoma elsewhere in the body. The patient received postoperative radiotherapy until March 2013. Presently, the patient is asymptomatic with normal neurological functions.

A 30 years old male presented with complaints of pain/stiffness in the neck and numbness/weakness in all four limbs. The symptoms had been present for 90 days and were gradually progressing.

Magnetic resonance imaging (MRI) scan of the cervical spine [Figures 1 and 2] showed an intradural extramedullary enhancing mass lesion at the second and third cervical vertebral level, compressing the spinal cord with focal cord edema and anterior-right lateral displacement of the spinal cord. The lesion measured 14 × 17 × 29 mm in size and was hyperintense on T1 and hypointense on T2 weighted images. Another intradural extramedullary mass lesion was found at the craniovertebral level, indenting the cervico-medullary junction. This lesion measured 13 × 18 × 16 mm in size and was hyper to hypointense on T1 and isointense on T2 weighted images. 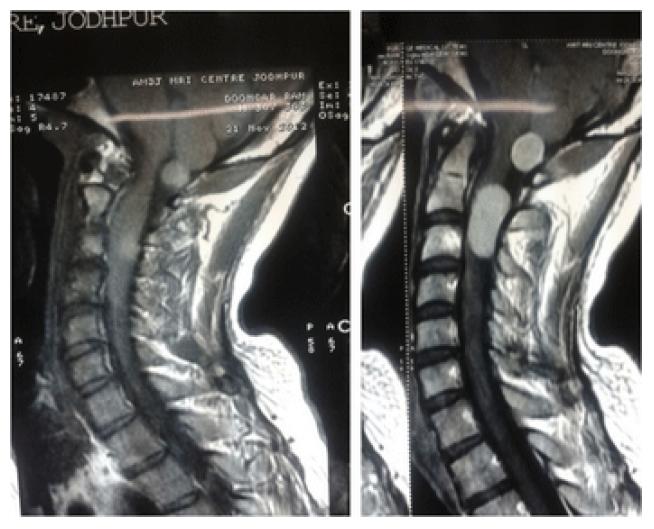 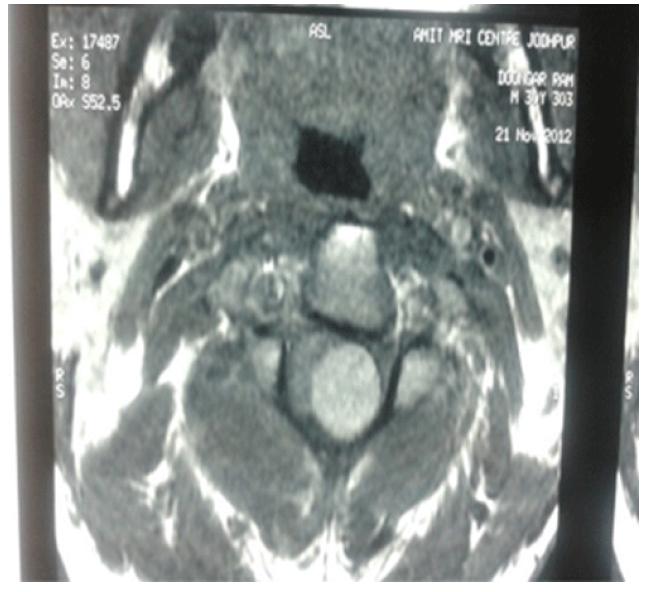 The patient underwent laminectomy and surgical excision and decompression on November 26th 2012. No residual lesion was found on postoperative MRI scan. 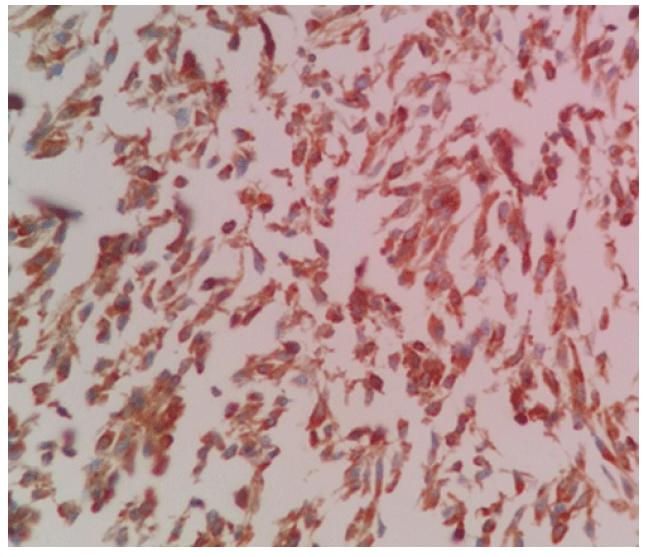 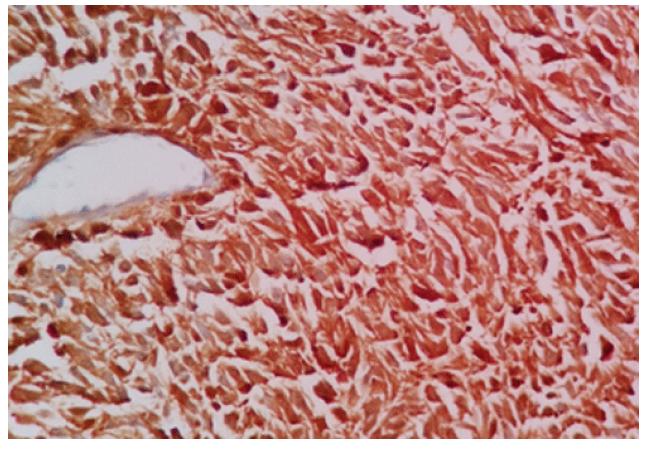 A thorough systemic survey was done including PET scan, tumor markers, ophthalmological, and dermatological examinations. These did not reveal any other foci of melanoma, leading to the diagnosis of primary spinal malignant melanoma. The patient received postoperative RT (50 Gray in 25 fractions on a linear accelerator with 6 MV photons by parallel opposed portals) from January 3rd to February 13th 2013. Since then, the patient has been on regular follow up with normal neurological functions.

The melanotic tumors of the CNS should be distinguished from other pigmented CNS lesions, e.g., meningioma, schawnnoma, pigmented astrocytoma, and gliomas.[4] The diagnosis can be confirmed by histology and immunohistochemistry, as per Hayward’s criteria stating that “there should be no melanoma outside the CNS, and the confirmation should be done by IHC.[5]” Melanocytic tumors are positive for S-100, HMB45, and Melan-A.

MRI of spinal cord melanoma shows characteristic features such as high signal intensity on T1-weighted images and equal or low signal intensity on T2-weighted images,[6] due to the paramagnetic properties of melanin or the hemorrhagic elements in the tumor.[6] Currently, there is no standard treatment for primary malignant melanoma of the spinal cord. The treatment regimen is similar to that of metastatic disease in the spinal cord, i.e., surgical resection followed by postoperative RT. Chemo- and immunotherapy have no proven clinical effects.[7] Differentiation between primary and secondary CNS melanoma is important, because primary CNS melanoma is associated with longer overall survival (OS).[8,9] OS in secondary CNS melanoma patients is less than one year,[1] although complete surgical resection followed by postoperative RT does increases OS in these patients.[10] However, lack of conclusive data renders the clinical outcome of spinal cord melanoma unpredictable.[2] 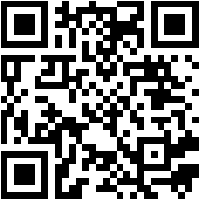