An unusual case of encapsulated papillary carcinoma of breast

Intracystic (encapsulated) papillary carcinoma of breast is a rare variant of breast cancer. It is usually a low-grade tumor showing estrogen, progesterone positivity. The authors report an unusual case of intracystic papillary carcinoma showing high nuclear grade, brisk mitosis, and necrosis with triple negativity for estrogen, progesterone, and Her-2/neu receptors, as well as negative axillary lymph nodes. Such cases need to be reported to increase awareness so that they will be managed conservatively, avoiding any overtreatment despite being high grade and triple negative.

Intracystic (encapsulated) papillary cancer (IPC) is a rare entity of breast cancer accounting for approximately 1 to 2% of all breast tumors and usually presenting in postmenopausal women.[1] Histologically, it is characterised by an expansile papillary lesion which is surrounded by a thick fibrotic wall and an absent myoepithelial cell (MEC) lining. These lesions are known to have an excellent prognosis with only sufficient local therapy.[2] They tend to have low-grade nuclei and low mitotic activity, and to be estrogen (ER) and progesterone (PR) receptors positive and Her-2 neu negative.[3] To date, there are only two reported cases of IPC which are triple negative in the literature.[2,4] Our case is unusual in being a noninvasive encapsulated grade III papillary carcinoma with negative nodes and triple-negative immunostaining.

A 60-year-old female presented with a complaint of progressively increasing swelling in the right breast since one year. The swelling was not associated with any pain or discharge. On physical examination, a 2 cm × 2 cm relatively firm lump was palpable in the upper outer quadrant. Mammography revealed a lobulated, well-defined nodular mass. Ultrasonography showed a well-delineated, heterogeneous, hypoechoic solid lesion with no axillary lymphadenopathy. Fine-needle aspiration cytology was performed, which showed sheets and occasional papillary clusters of ductal cells revealing extensive pleomorphism, vesicular nuclei, and prominent nucleoli [Figure 1]. Based on these findings, a diagnosis of high-grade ductal carcinoma was offered. Despite being a T2N0 tumor, a modified radical mastectomy (MRM) was performed to rule out any invasion and to look for any micro metastasis in lymph nodes. Gross examination showed a well-circumscribed and encapsulated mass measuring 2.8 cm × 2 cm × 2 cm having a friable grey-white cut surface with areas of necrosis [Figure 2]. The base of resection and overlying skin were 2 cm and 3 cm away, respectively, and free of tumor. Sections were taken from the tumor along with the capsule. Separate sections from the adjoining breast were also taken to rule out invasion. Eleven lymph nodes were dissected from the axillary fat. Microscopic examination showed a thick fibrous capsule surrounding a neoplasm composed of blunt or delicate papillary structures with central cores. Intervening necrotic areas were also seen [Figure 3]. The cells lining the papillae showed high-grade nuclear atypia with variable N:C ratios, vesicular chromatin, and prominent nucleoli [Figure 4]. Mitotic figures were seen frequently (> 10/10 hpf). The MEC lining was absent within the papillary processes and at the periphery of tumor; this finding was confirmed by performing immunohistochemistry for smooth muscle actin (SMA) [Figure 5]. Tumor cells were negative for ER, PR, and Her-2/neu immunostains, performed with positive controls [Figure 6]. Adjacent breast tissue showed only fibrosis. No invasive malignancy was seen. All the dissected axillary lymph nodes were free of metastasis (0/11). A diagnosis of encapsulated (intracystic) papillary carcinoma, high grade and triple negative, was rendered. Post-surgery on follow-up, the patient is disease free to date (4 months). 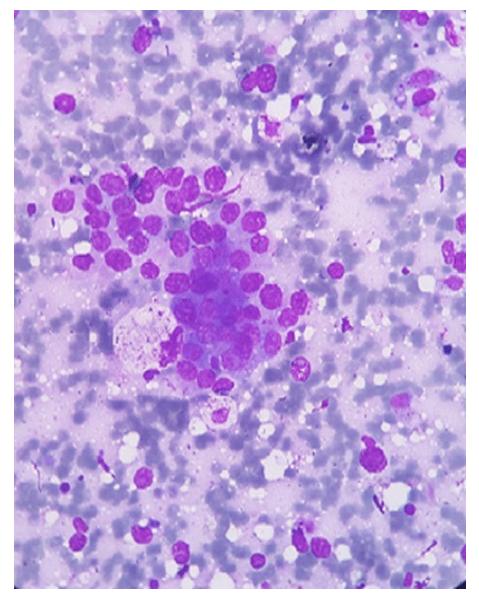 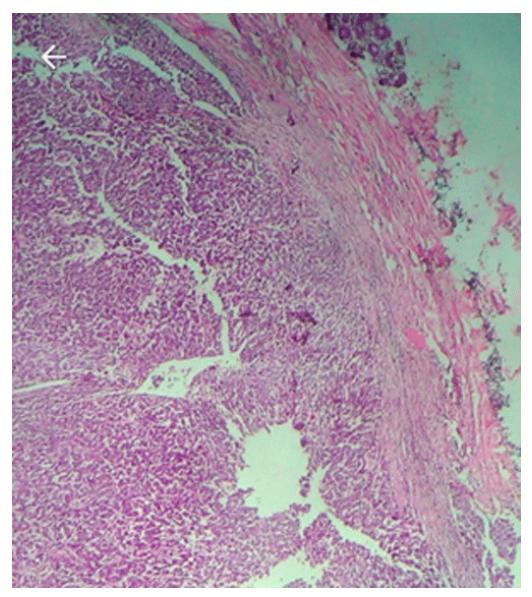 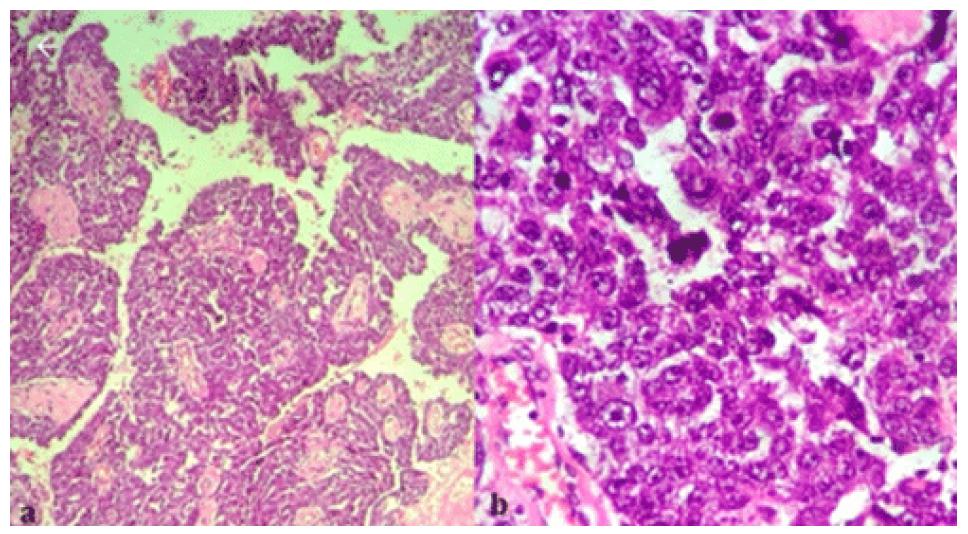 Papillary lesions of the breast are usually difficult to differentiate. Papillary carcinomas of the breast are divided into invasive and noninvasive types. The noninvasive type is further divided into the diffuse form (papillary variant of ductal carcinoma in situ) and the localized form (intracystic or encysted papillary carcinoma).[5] Encapsulated papillary carcinoma is characterised by the presence of papillary carcinoma within an apparent cystically dilated duct. Myoepithelial cells are present neither in the papillae of IPC nor at the periphery, in contrast to papillary ductal carcinoma in situ (DCIS), in which there are MECs at the periphery of involved spaces.[6] Several IHC stains like SMA, CD10, or S-100 can be used to confirm the presence of myoepithelial cells. IPCs have been considered to be a form of low-grade invasive carcinoma with an expansile growth pattern, or part of a spectrum of progression from in-situ to invasive disease.[6] IPCs may occur alone, but more often the surrounding breast tissue contains foci of low- or intermediate-grade DCIS, usually with a cribriform or micropapillary pattern.[7] Areas of invasive carcinoma may also be seen in association with them. These tumors are usually of low or intermediate nuclear grade with no evidence of necrosis and are strongly ER positive and Her-2/neu negative,[1] unlike our case, which shows high-grade nuclear features and is triple negative. Also, these tumors are well delineated, remain quiescent, and are best regarded as intraductal papillary carcinomas.[8] The patients with IPC are much less likely to die than those diagnosed with other types of breast cancer. At 10 years, the survival rate has been found to be greater than 95%.[5] Lefkowitz et al.[9] have reported a 100% survival rate and 91% disease-free survival rate at 10 years. The treatment options can involve breast-conserving surgery in the form of wide local excision with or without adjuvant radiotherapy or mastectomy.[10] Low-grade tumors are less likely to recur or metastasize and are best treated by local excision in the absence of invasion. On the other hand, patients with higher-grade tumors have an increased risk of recurrence and metastasis.[1] It is for this reason that a MRM was performed in our case because cytology showed high-grade nuclear features and invasion could not be excluded. Axillary interventions include sentinel lymph node biopsy and/or axillary dissection.[11] The low yield for metastasis and vascular invasion makes chemotherapeutic intervention not mandatory.[10] This treatment modality is considered only in cases associated with lymphovascular invasion. Adjuvant radiotherapy and endocrine therapy (tamoxifen) has been recommended in younger patients (< 50 years) and in patients having IPC associated with invasion and/or DCIS.[12]

In our case, no DCIS or foci of invasive carcinoma were seen in the surrounding breast. In addition to that, our case showed high-grade morphology (Nottingham’s histologic score = 8/9, grade III) with triple-negative immunostaining, which is a very rare finding.[2]

To conclude, the unusual high-grade adverse histomorphological features of IPC, with triple-negative immunostaining and no invasive foci, as seen in our case, is a rare finding. The management and prognosis in such a case remains questionable. 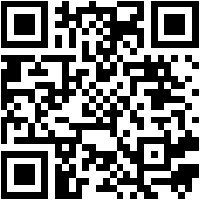