Gliomatosis cerebri (GC) is an uncommon disease, defined as diffuse infiltration of neoplastic glial cells involving at least three cerebral lobes. GCs in young population are rare. We described a case of 14-year-old woman with GC who did not receive any recommended treatment, because the patient’s family refused. The patient had a rapid deterioration in 5 months after first symptoms due to intratumoral bleeding. This is the first case report of intratumoral bleeding after diagnosis of GC is made, resulting in poor outcome. GC may acquire possibility of intratumoral hemorrhage through its development.

Gliomatosis cerebri (GC) is an uncommon primary brain tumor that has quite malignant behavior. It is characterized by diffuse infiltration of glioma cells, and defined with tumor invasion into more than three cerebral lobes.[1,2] It often infiltrates into bilateral hemispheres, in some cases, even into the brainstem, cerebellum, and spinal cord, affecting both gray and white matter. It is classified as grade IV in World Health Organization 2007 criteria, regardless of its histo-pathological features.

GCs in most cases are seen in the adult population, rarely suffering young age group. There are two peaks of patients’ age distribution in the second decades and forties.[3]

We report here a pediatric patient with GC who refused any treatment, subsequently followed by rapid deterioration with intratumoral bleeding.

A 14-year-old woman presented with generalized tonic-clonic seizures following to history of morning headache, and mild cognitive deteriorations. She had noticed slowly progressing weakness on her right face and upper extremity, and numbness on her right side.

Neurological examination on admission revealed right facial droop and pronator drift on the right side. The patient originally was right-handed active softball player, but grasping power was weak with 21 kg on the right and 29 kg on the left at the time. Decreased proprioception and touch sensation was observed both in upper and lower extremities on the right. She was previously healthy and achieved normal developmental milestones and scholastic achievement up to an onset, but had experienced a decline in cognition. Wechsler Intelligence Scale for Children (WISC)-IV score shows intelligence quotient (IQ) 50.

Fluid-attenuated inversion recovery (FLAIR) and T2-wighted sequences of magnetic resonance imaging (MRI) showed hyperintense signal lesion in the white matter of the left frontal, parietal, and temporal lobes [Figure 1A and 1B]. Follow up MRI in 2 months later showed development of the lesion into the frontal lobe, as well as the brainstem and corpus callosum [Figure 1C and 1D]. MR spectroscopy at the time shows high peaks in both chorine (Cho)/N-acetilaspartate (NAA) (2.9) and Cho/Creatine (Cr) (2.46), suggesting high grade glioma [Figure 1E]. 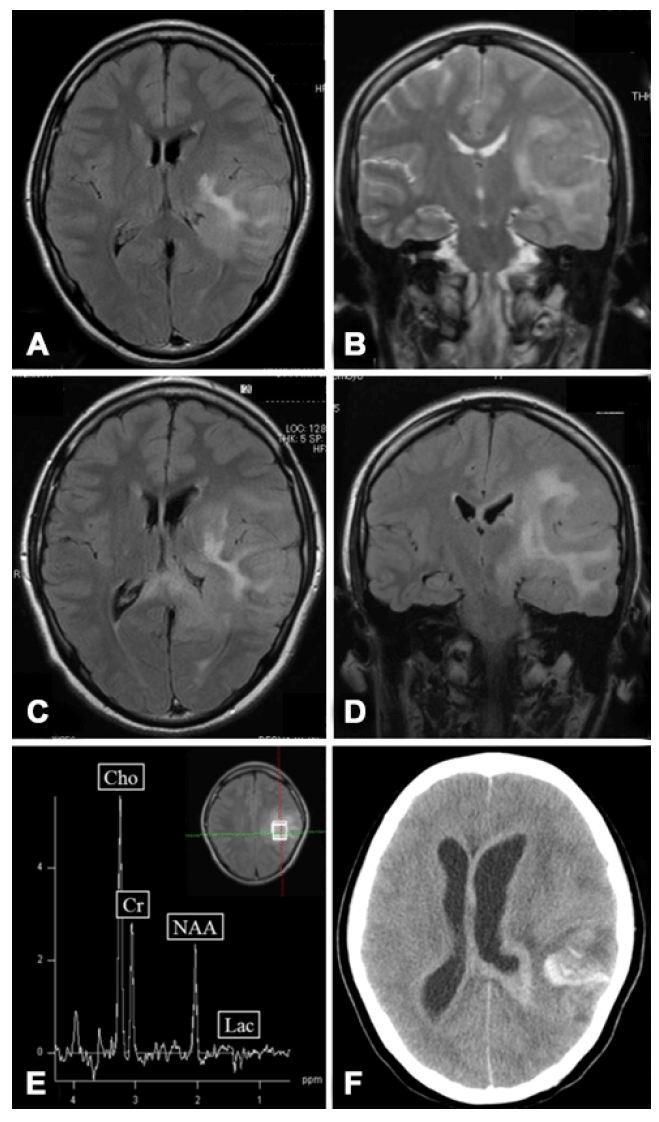 Open biopsy was performed targeting occipito-temporal mass near posterior horn of the left lateral ventricle, which shows solid swelling without contrast enhancement on MRI. Hematoxilin and eosine staining of specimen shows marked cellularity, with marked hyperchromatism and pleomorphism [Figure 2A]. Neither necrosis nor vascular proliferation was detected. Tumor cell infiltration in the peripheral zone of a tumor was found [Figure 2B]. Immunohistochemistry revealed positive staining for glial fibrillary acidic protein, and nuclear staining of p53. MIB-1 proliferation index was about 50% [Figure 2C and 2D]. With these results, histopathological diagnosis was made as anaplastic astrocytoma (grade III). The final clinical diagnosis was determined as gliomatosis cerebri due to invasion into 3 cerebral lobes and brainstem.

Considering potential poor prognosis of the disease, the patient’s parents refused either radiation or chemotherapy, and only oral corticosteroid and rehabilitation was given to the patient. Five months after the initial diagnosis, the patient had sudden respiratory arrest with uncal herniation due to intratumoral bleeding, and deceased [Figure 1F].

A case of pediatric GC which had poor clinical course with fatal intratumoral bleeding is presented. Although GCs in pediatric ages are rare, and there are no reports with large patients groups, a report with 13 GC patients under 18 years old showed that 2 years survival rate is 67%, and median overall survival is 27 months.[4] The report also shows 2 years survival rate of patients under 10 years old is only 19%. As such, pediatric GC has extremely poor prognosis.

As for treatment of GC in general, whole brain radiation therapy (WBRT) with 45-50 Gy is considered as standard therapy.[2] Retrospective study of WBRT with 54.9 Gy in average shows improvement of both overall survival (OS: 27.5 vs. 6.5 months) and progression free survival (PFS: 16.5 vs. 4.5 months).[2]

Chemotherapy for GC had not been considered as effective treatments even combined with radiation therapy (RT),[5] but recent growing publications support its efficacy to certain extent.[6] Chemotherapy with temozolomide is widely used recently, because of its safety. It has, however, insufficient effect to GC, and combination with RT is considered essential. Therefore, RT is recommended even for children who potentially have higher susceptibility for radiation.[6]

In the present case, the patient deceased in 5 months after initial diagnosis, which is just as short as reported in the study in the group without WBRT.[2] This case supports the necessity of RT in order to accomplish better OS or PFS.

Another reason why this patients had rapid deterioration was intratumoral bleeding. GC is classified into 2 types; type 1 (classical GC) shows infiltration of gliomatous cells with no mass lesions, and type 2 is categorized ones which develop tumor mass after type 1 infiltration.[7] In the MRI of GC type 1, it has no or very small tumor enhancement with gadolinium and low relative cerebral blood volume (rCBV) value in perfusion study.[8,9] Both indicate that the tumor has low vascularity; therefore it is expected to have small chance of intratumoral hemorrhage. To our knowledge, there is no report of intratumoral hemorrhage of type 1 GC. On the other hand, contrast enhancement can be seen in some cases of type 2 GC, with increased rCBV.[9] From these aspects, type 2 GC may have higher possibility of bleeding than type 1.

A pediatric case of GC with intratumoral bleeding is reported. GC may acquire possibility of intratumoral hemorrhage through its development, and may lead to catastrophic outcome.

The patient was treated within the standards of authors’ institute and the report was approved. 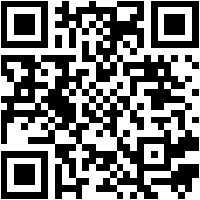