Merkel cell carcinoma (MCC), first described in 1972, is an aggressive primary cutaneous carcinoma able to incorporate both epithelial and neuroendocrine features. MCC mainly appears in individuals in their eighth decade and it is related to a high mortality rate. The etiology of this rare disease is not well-understood but ultraviolet radiation exposure, immune suppression, and aging have a consistent role in its pathogenesis. Usually, clinical lesions appear as asymptomatic coloured dermal nodules. The tumour can involve lymph nodes but further evaluation with imaging is recommended. The common approach for localized disease is surgical. This work reports a case of an 86-year-old man with locally advanced MCC where, based on clinical experience, oral mono-chemotherapy with single-agent etoposide was chosen as first-line therapy. A complete objective response was achieved in 2 months.

Merkel cell carcinoma (MCC) is a rare, aggressive, neuroendocrine carcinoma of the skin that originates from Merkel cells of the dermoepidermal junctions, although some recent work proposes pluripotent dermal stem cells to be origin of this neoplasm.[1]

The annual incidence is 0.6 per 100,000 persons[2] but is apparently increasing in the last years thanks to more accurate diagnostic pathology techniques, an aging population, increased sun exposure, and improved registry tools.

Males are more often affected than females, the median age at diagnosis being 76 years.[2] It is extremely rare in children, with only a few cases reported in literature.

Ultraviolet radiation exposure, chronic immune suppression (especially from chronic lymphocytic leukemia, human immunodeficiency virus, and prior solid organ transplant) and the Merkel cell polyomavirus are the main risk factors involved in the tumour pathogenesis.[4] Concerning the latter, many reports described a strong correlation between infection and carcinogenesis, although the presence of the virus itself is not sufficient to induce MCC.

Clinically, the lesion appears as a fast-growing, painless, solitary dermal nodule, firm, non-tender, coloured from red to violet; rarely does it present as an ulceration.

Skin of the face, arms and lower limbs are the most common sites of localization whereas the trunk and oral and genital mucosa are rare.[2]

The approach to disease management includes with a complete physical examination followed by imaging. Treatment strategies are best considered in a multidisciplinary board consultation. The surgical approach, when negative margins are possible and the disease is not disseminated, should be the first choice followed, when the risk assessment contemplates it or specific lymph nodes are involved, by adjuvant radiation therapy within 4 weeks. Adjuvant chemotherapy in regional disease could be considered depending on clinical judgment. In cases of disseminated disease, chemotherapy represents first line therapy; the choice of the agents to be taken based on clinical judgment and experience.

Here we present a case of MCC in an elderly man. The patient is consented and agrees with this publication.

An 86-year-old man presented with a purple-violaceous mass with vegetations in the left pre-auricular region, extending to the maxilla and involving the parotid area [Figure 1]. The lesion had been enlarging for more than three months. The patient had no history or evidence of comorbidities, apart from gallbladder stones and allergy to penicillin. An incisional biopsy was performed MCC. 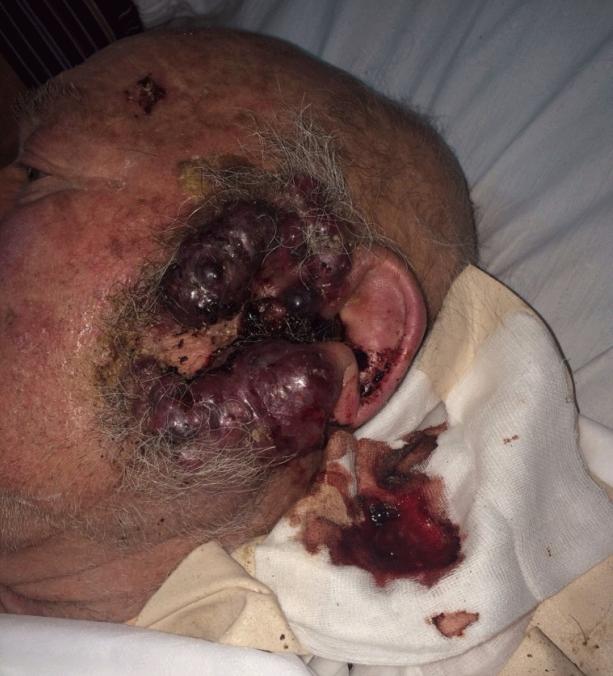 The neoplasm involved dermis and hypodermis; histology showed a dense infiltrate of small tumour cells with hyperchromatic nuclei and lacking cytoplasm. Immunohistochemistry was consistent with the diagnosis of MCC.

The tumour was classified MCC, T2, locally advanced. No other abnormalities were detected in the laboratory studies. Computed tomography (CT) scans showed no involvement of local lymph-nodes or distant metastases. Based on these clinical findings, the history, and on his age, an oral chemotherapeutic treatment was proposed. The patient started oral etoposide with the dosage schedule of 50 mg/m2 per 10 days followed by 7 days rest.

After one month of treatment the tumour showed a significant response [Figure 2]. There were side effects or laboratory abnormalities. 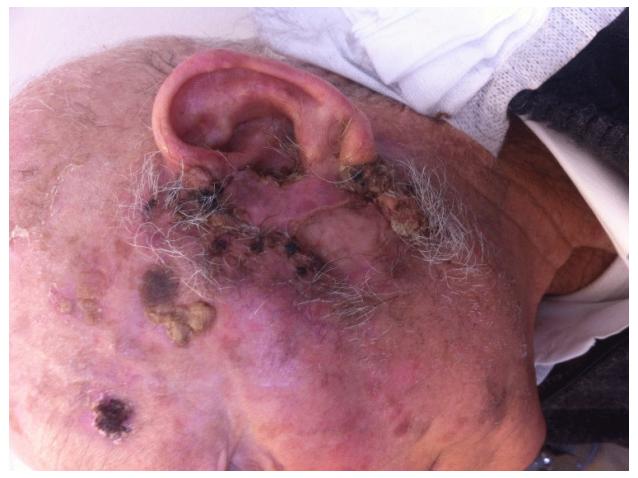 Figure 2. Response to therapy after 1 month of treatment

By 2 months there was evidence of complete objective response [Figure 3]. Considering the results, therapy was held. Adjuvant radiation was then given. 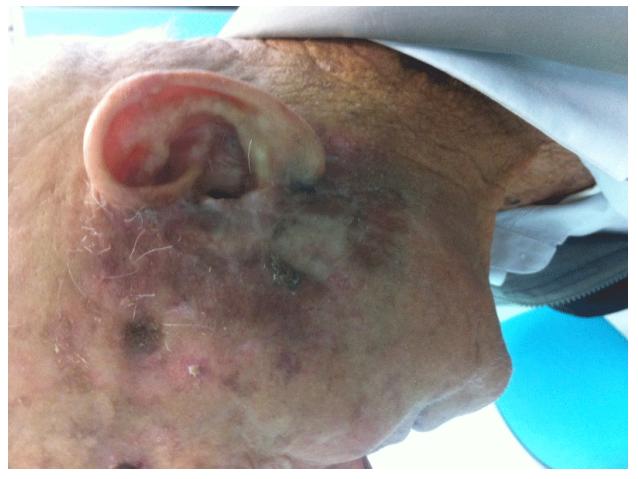 First described as trabecular carcinoma in 1972 by Toker,[6] MCC represents an aggressive, primary cutaneous carcinoma incorporating both epithelial and neuroendocrine features. The diagnosis is made by clinical evaluation and biopsy, although other small round cell tumors may be considered. For this reason a complete immunohistochemistry panel is needed for the correct diagnosis. Cytokeratin 20 (CK-20), a marker of epithelial origin, is a very sensitive marker for MCC[7] since it is positive in 89-100% of cases. Together with negativity of transcription factor 1 (TTF-1), it provides the greatest sensitivity and specificity to exclude small cell lung cancer,[8] although N-specific enolase, synaptophysin, and chromogranin-A represent markers of neuroendocrine origin with possible positivity. In our case, pathology and immune-histochemical markers, along with clinical features confirmed the diagnosis.

MCC generally shows a malignant behaviour, with regional lymph-nodes as well as distant metastasis being frequently involved. Twenty-five percent of patients present with lymphadenopathy and 5% with a distant metastasis. Skin, lung, nervous system, bone, and liver are the most frequent secondary locations.[9] For this reason lymph-nodal examination should be performed. Additionally, PET/CT is often useful for complete staging.

Surgery plays the key role for clinically localized MCC and a complete surgical excision with 2 cm safety margin, if feasible, seems to be the best treatment approach. Adjuvant radiation with 50 Gy to the tumour bed and regional lymph-nodes is also recommended, especially for advanced local and regional disease.[10] When surgery is not feasible, radiation therapy alone, or combined with alternative therapy (e.g., chemotherapy) should be considered.

Presently, there is no first-line chemotherapy established for MCC, since no controlled randomized trials exist. Only retrospective case series and case reports are available.

The chemotherapy regimens used have combined carboplatin or cisplatin with etoposide, cyclophosphamide with vincristine, doxorubicin, bleomycin, or 5-fluorouracil.

Despite a good initial response, early recurrences are the rule. In a retrospective analysis including a wide number of patients, adjuvant chemotherapy was linked to a worse overall survival compared to patients who did not received chemotherapy.[3]

In our patient, considering locally advanced disease, age, and patient’s history, we decided to start mono-chemotherapy with oral etoposide.

Previously, one group achieved complete responses in 3 out of 4 MCC patients treated with oral etoposide, two of whom had rather long remissions (16 and 36 months).[11]

Our patient achieved a complete objective response in a short period of time. However, long term follow-up is needed to rule out possible recurrence.