Aim: This retrospective study was performed to show the incidence of bone metastasis from carcinoma of the buccal mucosa. Head and neck cancer is a leading health problem in India due to an increased incidence of tobacco use and poor oral hygiene. Squamous cell carcinoma of the buccal mucosa is common and roughly 2.5% of all malignancies that present to our center. Moreover, most patients present at late stages (III/IV) and consequently, survival rates are low. Bone metastasis in advanced cases of such carcinomas is rarely reported worldwide but is more prominent in parts of India.

Methods: Here, we present a series of patients diagnosed with buccal mucosa carcinomas within the past 5 years that also demonstrated bone metastases.

Results: These patients were young, with a history of tobacco chewing with locally advanced disease and bone metastases that developed within one year of diagnosis. Flat bones and vertebrae were mainly involved and the survival was short after diagnosis of metastasis despite treatment with local radiotherapy and chemotherapy. The cause of such frequent metastases cannot be proved but subclinical seeding of malignant cells before the eradication of the primary tumor is probable contributory with advanced local and nodal disease with high grade tumor.

Conclusion: A pretreatment bone scan should be performed in locoregionally advanced buccal mucosa carcinomas at the time of diagnosis to deﬁne the treatment plan.

Carcinoma of the buccal mucosa is the most common oral cavity cancer diagnosed in India. The National Cancer Registry Programme of the Indian Council of Medical Research estimates that head and neck cancer forms 20% of all new cancers in India. Males of the Ahmedabad urban area showed the highest age adjusted rate (AAR) for mouth cancer (12.9), followed by Bhopal (9.9). For females, however, Bengaluru showed[1] the highest AAR (6.5) followed by the Kamrup urban district (5.8). In hospital, based cancer registry reports, cancer of the mouth is also ranked as the leading site in Mumbai in males and within the first five leading sites in all registries in males. In developed countries, carcinoma of the buccal mucosa is relatively uncommon compared to the Indian subcontinent. The high incidence of carcinoma of the buccal mucosa in our country is attributable to the oral consumption of tobacco, betel leaves, and nuts with lime. Alcohol, smoking habits, and poor socio-economic conditions also are contributing factors. Here, two-thirds of head and neck cancers present in an advanced local and nodal stage, leading to poor results, with chances of distant metastasis also increasing. Importantly, up to 70% of patients diagnosed with advanced solid tumors develop bone metastases primarily from breast and prostate carcinoma. Bone metastasis is rarely seen in head and neck cancers and primary buccal mucosa malignancies rarely metastasize to distant sites. They usually metastasize to lymph nodes or spread locally. The development of newer radiotherapy techniques and availability of better chemotherapy drugs used concurrently have led to better control of such cancers. In fact, better control of local disease may lead to an increased incidence of distant metastasis,[2] affecting survival. Bone metastases depend on the primary site of involvement, T and N stage and control of the nodal disease. It has been shown that patients presenting with advanced nodal disease show a higher incidence of distant metastasis, especially when there is extensive soft tissue or jugular vein involvement in the neck.[3] In this study, we found a surprisingly high incidence of bone metastasis in carcinoma of the buccal mucosa patients, mostly in those who underwent surgery. Thus, we present the incidence and discuss possible causes of such metastasis and provide treatment recommendations. This study was approved by review board of SAIMS.

From January 2008 to October 2014, a total of 5,791 cases of cancer were registered at the Sri Aurobindo Hospital in Central India. Head and neck cancer represented 25.8% of all malignancies and carcinoma of the buccal mucosa was 9.9% of all head and neck cancers and 2.6% of all malignancies. It was more common in males than females, with a ratio of 4:1. Tobacco chewing and poor oral hygiene were common factors associated with the patient characteristics. Carcinoma of the buccal mucosa was more common in younger individuals, with median age at diagnosis of 45.87% patients presented in stage III and IV and 75% of patients reported after surgery for adjuvant treatment. Four patients all developed bone metastases. All 4 patients had locally advanced disease [Table 1] and all underwent hemi-mandibulectomy with ipsilateral neck node dissection. Patients then received postoperative concurrent chemotherapy and radiotherapy, 60 Gy in 6 weeks with 6 MeV photons by linear accelerator. Upon completion of treatment, all 4 patients had local control but within 2-8 months, all 4 patients developed bone metastases. At the time of diagnosis of bone metastasis, patients received local radiotherapy, 30 Gy in 10 fractions to the involved bone, followed by chemotherapy with cisplatin and paclitaxel. None completed the planned six cycles of chemotherapy and had died within 6-9 months.

Carcinoma buccal mucosa was reported in 9.9% of all head and neck cancers, although most patients did not complete the planned treatment. On follow-up, of 148 patients, 24 (16.2%) had local recurrence within one year, one patient developed second primary after 8 years, and 2 patients had lung metastasis and 4 patients developed bone metastasis. The incidence of bone metastasis was 0.2% of all head and neck cancer as compared to 0.1% reported in the literature worldwide.[1] Sacrum, pelvis, vertebrae and index finger were commonly involved. Bone metastases developed 6-9 months upon completion of primary treatment, with all 4 patients presenting with locally advanced disease and nodal metastasis. All 4 patients underwent surgery as the primary treatment, followed by adjuvant concurrent chemotherapy and radiotherapy. All patients had grade II to III squamous cell carcinoma. Our incidence of bone metastasis of all carcinomas of buccal mucosa was 2.71%. We could not find the reported incidence in the literature worldwide. All 4 patients had advanced local (T4) lesions and 3-8 nodes were involved. None had extra nodal spread but one had perineural spread. All had deep muscle infiltration, with 2 patients also having mandibular bone involvement. After postoperative radiotherapy, all had local control but within 6-9 months, patients complained of severe local bone pain and an X-ray/computed tomography scan showed lytic bone lesion at the site of involvement in all 4 cases [Figure 1-3]. Fine needle aspiration cytology from the bone metastatic sites of all four cases indicated pathology consistent with metastatic disease [Figure 4]. All patients received palliative local radiotherapy to the involved bone to relieve pain, followed by chemotherapy with cisplatin and paclitaxel. After radiotherapy, all patients had complete bone pain relief. Despite treatment, the disease progressed and all patients died within 6-9 months of development of bone metastasis. 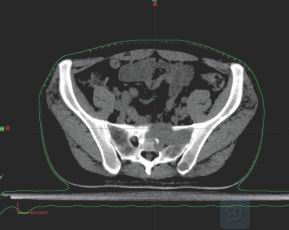 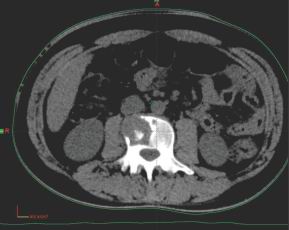 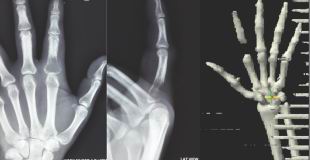 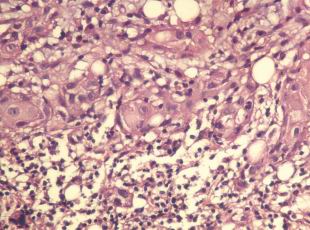 Head and neck squamous cell carcinoma has a high propensity for loco-regional spread through lymphatic and/or hematogenous spread and occurs in about 10% of cases. Sites of metastases most commonly include the lungs, brain, bones, and skin.[4] Newer diagnostic regimens and more thorough work-up at diagnosis have improved our understanding of squamous cell carcinoma and consequently loco-regional control of cancer above the clavicles has increased.[5] However, the overall disease-free survival rate has not improved[6] and the incidence of distant metastases and second primary tumors has increased.[7] Risk factors for hematogenous spread include higher tumor stage, size of the primary lesion (T4), tumor grade, and the lesion site. The incidence of distant metastasis is hypopharynx 60%, base of tongue 53%, and anterior tongue cancer 50%.[8]

Distant metastases were all seen within one year of completion of primary treatment. Thus, there is probably subclinical seeding of malignant cells before the eradication of the primary tumor. The average survival with distant metastasis ranged between 21 and 33 weeks.[10,11] In this series, bone metastases occurred within an average of 9 months from diagnosis and survival was only 6-9 months after development of bone metastasis.

There was one study of patients with locally advanced head and neck cancers at presentation who developed metastases.[12] The usual primary sites were base of tongue and tonsil, with solitary bone metastases and a postoperative buccal mucosa case where multiple osteolytic bone lesions were seen. The cause of distant metastases after local control is not known although all patients who developed bone metastasis had advanced nodal disease and one patient also had extra capsular spread. All patients in our study had undergone surgery and had advanced local and nodal disease at presentation.

Axial skeleton is the most common site of bone metastasis in our cases, involving spine, pelvis, and ribs, with lumbar spine being the most common.[13] In the appendicular skeleton, the proximal femur and humerus are mainly involved. Patients in this series have involvement of the flat and appendicular bones which are the usual sites involved. One study reviewed radiographs and nuclear medicine studies of 363 patients of head and neck cancers retrospectively.[14] It was found that 1% developed bone metastasis, mainly involving pelvic bones, femur, humerus, ribs, and thoracic vertebra. These lesions were mainly osteolytic, with moth-eaten or permeated borders. In our series, we also found that the flat parietal bones of skull, ribs, and sacrum, and long bones such as shaft of femur and radius were involved. Osteolytic lesions usually appeared within 3-12 months of completion of the primary treatment. The prognosis of carcinoma buccal mucosa patients who develop bone metastasis is usually poor with a median survival about 8 months.[15] We also saw that bone metastases occurred an average of 9 months after the primary treatment.

A probability of subclinical seeding of malignant cells before the eradication of the primary tumor should be considered. In young patients with locally advanced disease distant metastases can affect different organ systems including the bones and almost invariably herald a poor prognosis. Treatment is always palliative and survival remains less than one year. In locoregionally advanced cases of all head and neck carcinoma cases, a bone scan should be done prior to definitive treatment in order to avoid unnecessary local treatment and start systemic treatment earlier to improve survival. 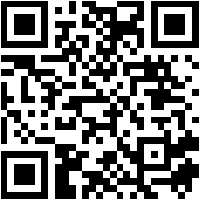