ERCC1 expression in patients with colorectal cancer: a pilot study

The antimetabolite, 5-Flourouracil (5-FU), was introduced in 1957 by Heidelberger et al.[1] and today it is the cornerstone of chemotherapeutic regimens in treatment of colorectal cancer (CRC). However, the overall response rate is only 10-15% for advanced CRC when treated with 5-FU alone.[2] In recent years, the outcome of patients with CRC has been improved significantly because of the use of oxaliplatin-based combination therapy with 5-FU (FOLFOX). Oxaliplatin, in combination with leucovorin and 5-FU, is quite effective in the treatment of CRC, in both the adjuvant and metastatic settings.[3]

Oxaliplatin is a cytotoxic platinum compound which exerts its effects through development of DNA adducts.[4] DNA repair, especially nucleotide excision repair (NER) pathway, plays an important role in platinum-based chemotherapeutic efficacy by repairing drug-produced DNA damage. Excision repair cross complementation group 1 (ERCC1) is a chief component of the NER pathway[5,6] and a highly conserved protein, essential for elimination of DNA adducts caused by the platinum compound. It plays a major role in better repair and tolerance of DNA damage, leading to resistance of platinum drugs.[7,8]

A common C/T single nucleotide polymorphism (SNP) at codon 118 of ERCC1 has been identified. This SNP may contribute to inter-individual variability in DNA repair capability and has been documented as a predictor for outcome in CRC patients who have been treated with platinum-based chemotherapy.[9] This polymorphism results in the same amino acid, asparagine, but a tendency towards elevated ERCC1 mRNA and protein levels observed as the number of T alleles increases. Moreover, clinical and preclinical studies indicate that overexpression of ERCC1 protein is associated with resistance to platinum-based chemotherapy in various types of cancers.[10,11]

Therefore, the present study aimed to evaluate the prevalance of ERCC1 C118T SNP polymorphism and the expression of ERCC1 protein in patients with primary CRC and further to evaluate their role in the clinical outcome of CRC patients.

A total of 50 CRC patients who underwent surgical resection at the Gujarat Cancer and Research Institute, Ahmedabad, between 2013 and 2014 were included in this study. Inclusion criterion was an untreated CRC patient with histopathologically confirmed adenocarcinoma without any prior history of anticancer treatment. Patients were followed for a minimum of 15 months or until death within that period.

The study was approved by Institutional Scientific and Ethical Committees and informed consent was required from all patients prior to sample collection. To examine ERCC1 polymorphism, colorectal tumor was collected from the histopathology department immediately after surgery. The tumor portion was selected by the pathologist, snap frozen in liquid nitrogen, and immediately stored at -80 ℃ until analysis. For the study of ERCC1 protein expression, paraffin embedded tumor tissue blocks were retrieved from histopathology department.

DNA extraction from tumor was performed by Phenol: Chloroform method. PCR of the SNP C/T at codon 118 of ERCC1 gene was performed using QIAGEN Taq PCR kit and following primers sequences: forward primer: 5’-GCAGAGCTCACCTGAGGAAC-3’; reverse primer: 5’-GAGGTGCAAGAAGAGGTGGA -3’ (Sigma-Aldrich). After initial denaturation at 94 °C for 3 min, the following PCR protocol was performed for 35 cycles: Denaturation at 95 °C for 1 min, annealing at 55.7 °C for 45 s, and extension at 72 °C extensions for 1 min. Digestion of these PCR products was performed with BsrD1 restriction enzyme (New England BioLabs, USA) at 65 °C for 4 h and separated on 2% agarose gel.

Immunohistochemistry for ERCC1 was performed on 4 μm thick formalin-fixed, paraffin embedded tissue sections. FFPE tumor tissue sections were stained using mouse- and rabbit- specific HRP/DAB (ABC) Detection IHC kit according to manufacturer’s protocol. The primary antibody used was mouse monoclonal anti-ERCC1 (clone 4F9: Dako, USA, dilution: 1:50). Sections known to exhibit high expression of protein were used as positive controls, while negative controls were obtained by omission of primary antibody. A semiquantitative score was used starting from negative (no staining or, 10% of cells stained) to 3+ (1+ staining for 11-30% of cells: weak, 2+ staining for 31-50% of cells: moderate, and 3+ staining for > 50% of cells: intense).

Patient and tumor characteristics of the 50 patients are outlined in Table 1. The median age was 55 years. There was a considerable proportion (54%) of elderly and dominance of male patients (60%). The incidence of patients having colon cancer was higher (56%) as compared to rectal cancer (44%). Higher occurrence of early stage patients (60%) was observed. Complete follow-up details were obtained in 80% (40/50) and were included for OS analysis. Amongst these 40, 4 died due to disease and hence were not included for the RFS analysis. Therefore, 36/40 CRC patients were considered for RFS analysis from which 2 patients developed recurrence [Table 1]. 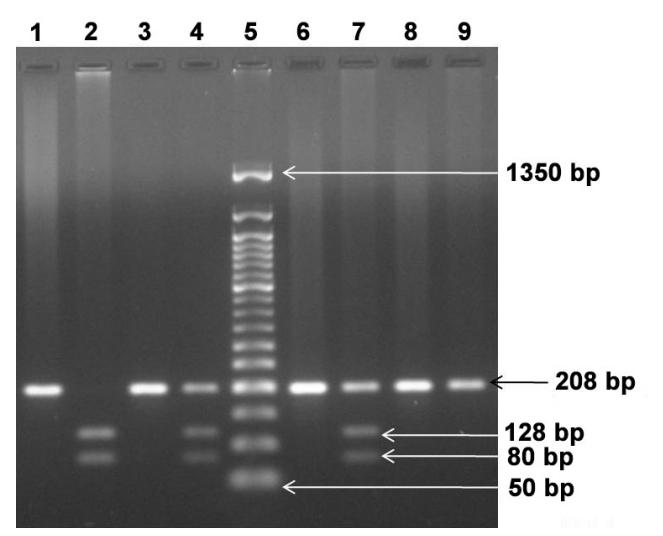 Thirty-eight percent (n = 19) showed the C/C genotype, 52% (n = 26) showed the C/T genotype, and 10% (n = 5) showed the T/T genotype. Thus, prevalence of C/T heterozygous genotype was observed in this group of CRC patients. The distribution of ERCC1 codon 118 polymorphism genotypes was consistent with the Hardy-Weinberg equilibrium among patients (χ2 = 0.82, P = 0.36). 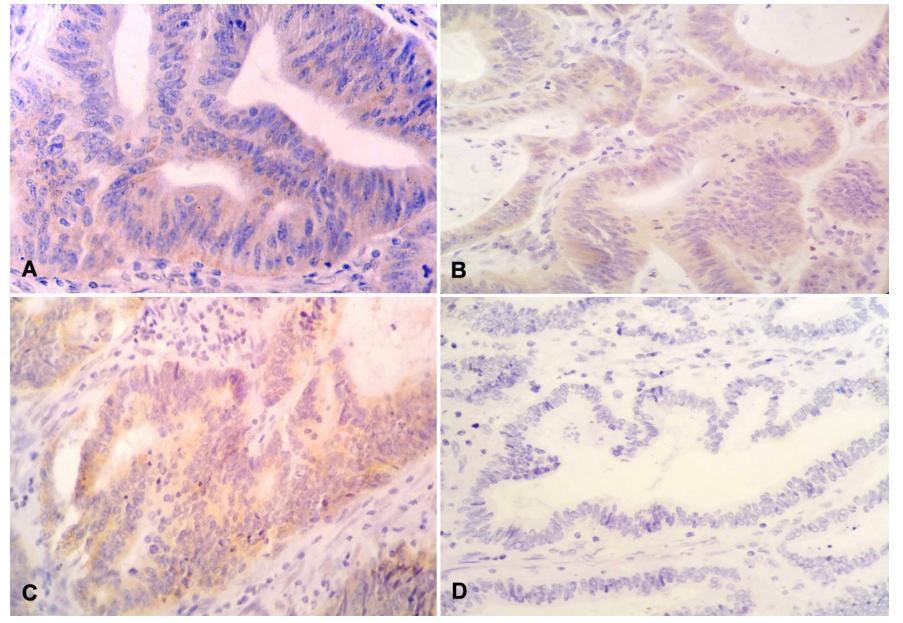 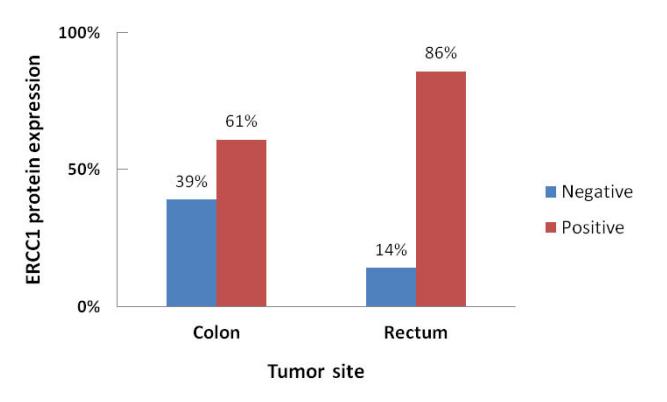 When patients were stratified according to ERCC1-118 polymorphism, it was observed that both patients (100%) who had developed relapse had the C/T genotype, whereas amongst the 5 patients who died, 2 (40%) each had the C/C and C/T genotypes, and one (20%) had T/T. Further, when patients were stratified according to ERCC1 protein expression, of the 2 who developed recurrences, one (50%) was ERCC1-positive and another (50%) was ERCC1-negative. Among the patients who had died, 4 (75%) were ERCC1-positive and one (25%) was ERCC1 negative. However, the data were statistically non-significant.

Oxaliplatin, a platinum-based chemotherapeutic drug, induces DNA damage by forming DNA adducts. DNA repair proteins involved in the NER pathway, such as ERCC1, play a key role in repair of this damage, thus leading to resistance to platinum-based therapy. Several clinical studies have demonstrated that both ERCC1 polymorphism and protein expression are associated with resistance to platinum-based chemotherapy and have the potential to be used as candidate biomarkers for CRC. Therefore, the present study explored the role of ERCC1 C118T SNP as well as ERCC1 immunoreactivity in CRC patients.

In the present study, it was found that there was positive ERCC1 protein expression in 72% of CRC patients. Likewise Wang et al.[14] reported 68.1% positive ERCC1 immunoreactivity in patients with gastric cancer. However, in 2 studies, ERCC1 positivity was observed in 45% and 55% of patients with colorectal and stage III disease, respectively.[4,15] This discrepancy may be due to several factors including antibody used, scoring technique, used and in preparation of the paraffin embedded tissue blocks.

To date, most studies have focused more on pathologic and molecular features, but less on clinical features with molecular variables. Therefore, in the present study, correlation of ERCC1 polymorphism and protein expression with clinicopathological parameters was evaluated. However, none of the clinicopathological parameters was significantly associated with ERCC1 gene polymorphism. Similarly, another study did not find statistically significant correlations between genotype distributions and gender, tumor location, tumor invasion, lymph node metastasis, tumor stage, or histology in CRC patients.[16] The present study showed no significant association between ERCC1 protein expression and clinicopathological parameters apart from tumor site. Still another study reported no significant differences in gender, tumor stage, nodal stage, histological differentiation, lympho-vascular invasion, neural invasion, or postoperative CEA levels between the ERCC1 positive and negative groups. However, ERCC1 positive expression was significantly associated with older age group patients (P = 0.031).[17] Also it has been shown in patients with nasopharyngeal carcinoma that the expression level of ERCC1 increased significantly with higher T stage and clinical stages (P < 0.05). Thus, at least in that malignancy, ERCC1 seemed to be a valid biological indicator to predict prognosis.[18] In the present study, ERCC1 positive protein expression was found to be significantly higher only in rectal cancer patients as compared to colon cancer patients (P = 0.046).

Several studies have investigated the prognostic role of ERCC1-118 SNP and ERCC1 protein expression in CRC patients and other cancers types but the results obtained were controversial. In one report ERCC1 codon 118 C/C genotype was significantly associated with higher response rates, progression-free survival, and OS in metastatic CRC.[4] However, another supported the pharmacogenetic role of the ERCC1-118 C > T change and emphasized that the T allele was a marker of a better outcome in patients with CRC treated with OX-based schemes.[22,23] Thus, the relationship between ERCC1 codon 118 SNP and clinical outcome in patients with CRC remains controversial although one study reported significantly shorter progression-free (P < 0.01) and overall (P < 0.01) survival in patients having positive ERCC1 IHC staining in colorectal tumor tissues.[4] It was also observed that 5-year DFS and OS were significantly lower in combined therapy group with positive ERCC1 tumors than in the same group patients with negative ERCC1 tumors.[15] However, in present study, due to short follow-up period of 15 months, no correlation of RFS and OS was observed with ERCC1 C118T SNP and ERCC1 protein expression. We recognize that a limitation of this study is that SNP assessment was not confirmed by Sanger sequencing. Further studies will be necessary to validate our findings.

Patient consent was acquired from all patients prior to sample collection.

The study has been approved by Institutional Scientific and Ethical Committees.