2Student in Medicine and Surgery, University of Messina, 98125 Messina, Italy.

A 78-year-old female patient arrived at our practice complaining of progressive abdominal increase and presenting a clinical picture of intestinal obstruction. At physical examination, the abdomen appeared distended, moderately painful with the presence of a mass of hard consistency. Abdominal computed tomography scan showed a large hypodense pelvic mass that indicated a compression and lateral deviation of the uterus and bladder. Microscopically, the mass showed a uniform solid pattern, composed of medium and large-sized cells with hyperchromatic and pleomorphic nuclei demonstrating high mitotic activity and diffuse immunoreactivity for estrogen receptors and synaptophysin. A diagnosis of uterine poorly differentiated large cell neuroendocrine carcinoma, arising in the endometrium with an unusual colonic metastatic localization, was made.

Uterine neuroendocrine carcinomas are rare and highly malignant tumors, morphologically subdivided into small and large cell according to their nuclear size, presenting as pure or combined forms, either associated with endometrioid adenocarcinoma or as a component of a malignant mixed müllerian tumor.[1,2] It has been reported that the primary site of neuroendocrine tumors (NETs) is unknown in about 13% of patients,[3] although the exact incidence of unknown primary NETs has not been fully determined.[4] To identify the nature as well as the primary site of NETs, the immunohistochemical approach appears to be the most useful approach. It allows a correct characterization identifying site-specific transcription factors, such as thyroid transcription factor 1 (TTF-1) and CDX2.[5] In particular, nuclear TTF-1 staining is effective in more than 50% of pulmonary carcinoids but only rarely in gastrointestinal NETs, while nuclear CDX2-staining is revealed in gastrointestinal NETs but seldom in pulmonary carcinoids.[5] Moreover, in poorly differentiated neuroendocrine carcinomas, transcription factors are expressed irrespectively of primary neoplastic site, causing diagnostic problems.[5]

We report a case of a large cell neuroendocrine carcinoma (LCNEC), initially developed in uterus and clinically silent, with an unusual colonic metastatic localization during the progression of the disease.

A 78-year-old female patient arrived in our practice complaining of progressive abdominal increase and presenting a clinical picture of intestinal obstruction. Her past medical history was characterized by an episode of intestinal perforation six months before in another hospital including right hemicolectomy. The histopathological examination of the surgical specimen suggested a poorly differentiated adenocarcinoma with serosal invasion (T4) and lymph node metastases (N1). The patient received 5 successive cycles of chemotherapy and underwent a follow-up examination. Six months later she was admitted to our hospital; at physical examination, the abdomen appeared distended, moderately painful with the presence of a mass of hard consistency. Tumor markers were normal. The patient underwent an abdominal computed tomography scan showing a large hypodense pelvic mass of 21 cm × 15 cm × 19 cm, with peritoneal implants, which caused an important distortion and lateral deviation of the uterus and bladder. Regional lymph nodes were enlarged. The patient underwent debulking surgery. A large neoplastic mass occupied the abdomen from the transverse colon to the pelvis, infiltrating the small intestine, the anterior parietal and prevesical peritoneum, the sigmoid colon and proximal rectum. The small intestine was disease free for about 160 cm, being dislocated in the left upper quadrant. Surgeons isolated the lesion from the retroperitoneal structures and then removed en bloc the tumor, the small intestine, a small portion of the residual transverse colon, the sigmoid colon, the proximal rectum, the uterus, the uterine annexes, pelvic and anterior parietal peritoneum [Figure 1]. Finally, reconstruction of the digestive tract was performed by creating a mechanical termino-lateral ileo-transverse anastomosis and terminal colostomy. Postoperatively the patient was admitted to the intensive care unit for 7 days. Gastrografin enema, performed on the 8th post-operative day to control the ileo-colic anastomosis, demonstrated the absence of any leakage. Three months later the patient was alive, but was subsequently lost to follow-up.

Figure 1. Grossly anterior and posterior appearance of the surgical specimen. (A) Macroscopically, in the anterior view, the relationships between neoplasia and adjacent anatomical structures are seen; (B) grossly, the tumor mass is easily appreciable at the posterior view of the surgical sample

Source, working dilution and immunostainings regarding the panel of utilized antisera

Microscopically the mass appeared to have developed in the uterine corpus involving the myometrium and serosal layer, with an infiltration of the colonic wall indicating lymph node metastases as well. The proliferation showed a uniform solid pattern, with complete absence of glandular differentiation and areas of geographic necrosis [Figure 2A]; it was characterized by medium and large-sized cells with hyperchromatic and pleomorphic nuclei, prominent nucleoli and high mitotic activity [Figure 2B]. Immunohistochemistry revealed a diffuse positivity for estrogen receptor (ER) [Figure 3A], chromogranin-A [Figure 3B], synaptophysin [Figure 3C], MLH1, MSH2, MSH6 and a partial staining for EMA, CD56 and progesterone receptor (PgR). No immunostainings were present for CK, CK 7, CK20, CDX2, TTF1, Pax-8, CD10, vimentin, desmin and CD99. The growth fraction, assessed with Ki67, revealed a positivity of more than 80% of neoplastic elements. A diagnosis of infiltrating poorly differentiated LCNEC was made, based on synaptophysin, chromogranin-A, ER and PgR immunoreactivity. The diagnosis was classified as a primary tumor of the uterus, with extensive colonic and peritoneal spread. In light of these findings, we took the opportunity to re-examine the original neoplastic paraffin-block taken at the colonic level during the first surgical procedure. Histologically the colonic wall was extensively ab-extrinseco infiltrated by a highly cellular solid proliferation [Figure 4A], suggestive of a poorly differentiated adenocarcinoma, but absolutely unreactive for CK20 [Figure 4B], a marker usually positive in colonic cancer. Finally, a heterogeneous, well evident, cytoplasmic staining for chromogranin-A (Figure 4B, inset) was appreciable in neoplastic elements. These morphological data were consistent with a diagnosis of colonic parietal infiltration by aggressive neuroendocrine carcinoma. 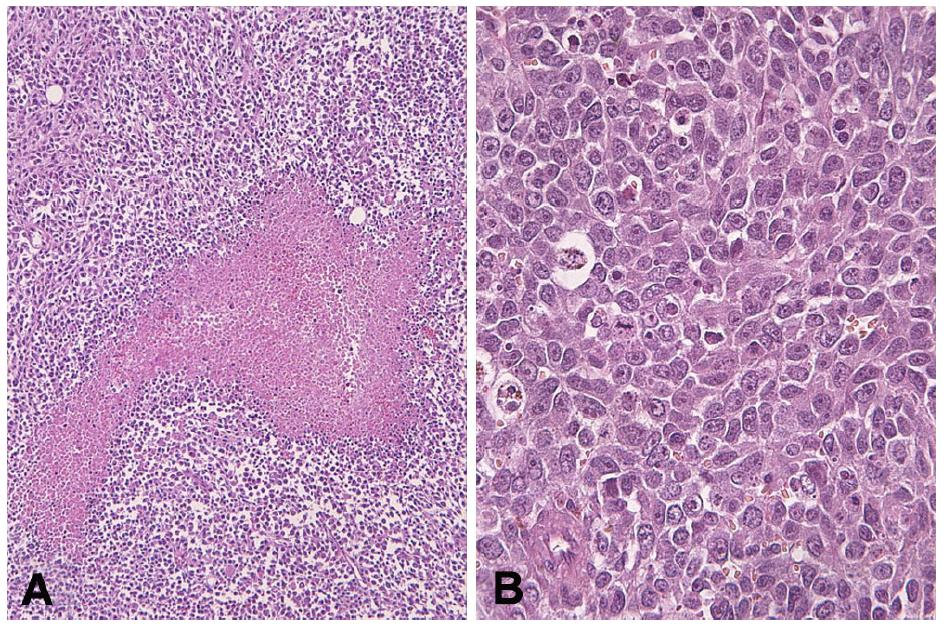 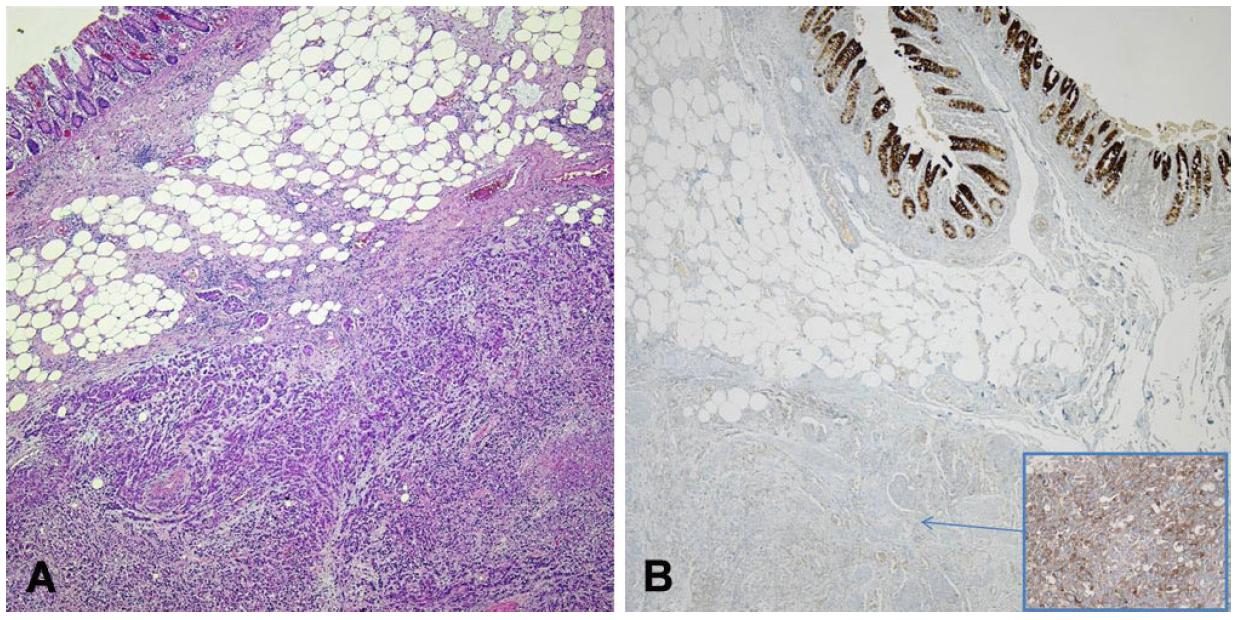 Figure 4. At lower magnification the neoplastic proliferation presented an infiltrative extrinsic pattern of the colonic wall in the first surgical sample (A, ×120, hematoxylin-eosin stain); the neoplasm was unreactive for CK20, (note the positive control of the normal mucosa). The inset showed a patchy not uniform immunoireactivity for chromogranin-A in neoplastic elements (×240, haematoxylin nuclear counterstain)

NETs are more generally identified in the gastrointestinal tract, pancreas, lung and thymus, while in the female reproductive tract they account for about 2% of all gynecologic cancer.[6,7] According to World Health Organization classification, NETs are classified in two principal groups: poorly differentiated neuroendocrine carcinomas (NECs) and well-differentiated NETs.[8] NECs include small and large cell neuroendocrine carcinoma, while NETs include typical and atypical carcinoids.[8]

Poorly differentiated LCNEC of the endometrium is a very uncommon tumor representing only 0.8% of endometrial cancers and they are considered particularly aggressive neoplasms with a tendency for early metastases and poor outcomes.[9] Usually, endometrial NECs are combined with other epithelial neoplasms; in detail, 50-80% of cases are admixed with FIGO grade 1 or 2 endometrioid adenocarcinoma.[6,7] To explain this intriguing association it has been hypothesized that some endometrial NECs may arise from the neuroendocrine component of endometrioid carcinomas.[10] Although the possibility that an abdominal NEC may secondarily develop due to chemotherapy for an original endometrial carcinoma should be mentioned, nevertheless in the present case this option should be excluded since the first diagnosis and consequently the therapeutical approach were based on colonic poorly differentiated carcinoma. It has also been suggested that these tumors can be derived from pluripotent stem cells with the possibility for both neuroendocrine and glandular endometrioid differentiation.[11]

In our case, the most intriguing difficulty was to discriminate between a primary uterine tumor and a uterine metastasis from the previous diagnosed colonic NEC. Consequently, we initially performed an immunohistochemical analysis with typical positive markers of the female genital tract, such as ER and PgR, since these receptors are usually considered useful to define the origin of unknown metastatic carcinoma.[14,15] However, the neoplastic proliferation in the present case was strongly positive for ER and negative for CDX2; therefore, it was in contrast to gastrointestinal NETs, characterized by a variable nuclear CDX2 and a negativity for ER and PgR.[5] According to these immunohistochemical findings, we have proposed to apply the same immunohistochemical panel to the colon specimens formerly removed in another hospital, that have confirmed our results supporting the diagnosis of primitive uterine LCNEC.

No prognostic data have been available until now for uterine LCNEC, while only survival data have been reported for cervical small cell neuroendocrine carcinoma (SCNEC). These have showed progression free survival and overall survival (OS) rates of 22% and 30%, respectively, and a median progression time of 9.1 months.[16] Recently, uterine LCNEC cases have been associated with microsatellite instability (MSI);[17] in detail, by immunohistochemistry it has been showed a mismatch-repair protein immunoexpression in about 44% of uterine NECs cases, with a prevalence of MLH1/PMS2.[17] However, an intense nuclear positivity with MLH1, MSH2 and MSH6 was observed in our case. Even though it has been demonstrated that a subset of gastrointestinal NECs exhibiting MSI showed a better prognosis than NECs without these features,[18] in uterine NECs the presence of MSI does not appear to be associated with a good prognosis.[17]

Currently, there is no consensus about the standard treatment of these tumors with either adjuvant chemotherapy or with radiotherapy.[19] In cervical SCNEC cases, it has been suggested that patients who received platinum-based chemotherapy had both a 3-year recurrence-free survival (RFS) and a 3-year OS of 83%, while those not treated with chemotherapy exhibited RFS and OS of 0% and 20%, respectively.[16] In our case, the surgical procedure was undertaken to debulk the colonic mestastatic localization with additional chemotherapy; nevertheless, taking into consideration the aggressive course and poor prognosis of LCNEC, characterized by the low therapeutic response with a progression of disease, the opportunity of neoadjuvant chemotherapy approach prior to surgery should be considered in the future.

A patient’s written consent was achieved for scientific institutional purpose.

All procedures were performed in accordance with the Helsinki declaration. No further ethical approval was necessary to perform the diagnostic routine analysis as well as the immunohistochemical algorithm. 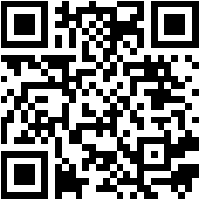