Locally advanced pancreatic carcinoma has an usually poor prognosis despite multimodal approaches and sequential chemotherapy. The authors present a case of a long-term survivor with stage III pancreatic adenocarcinoma achieving partial response after a multimodal approach including local and systemic treatments. However, three years after diagnosis and amidst several episodes of cholangitis, hepatic metastasis were suspected. Despite pancreatic adenocarcinoma being the obvious culprit for metastization, a hepatic biopsy was considered at that time given a stable primary disease and presenting three years since the initial diagnosis. At this point, a biopsy could have specific diagnostic, prognostic and therapeutic implications and after it was performed, an unexpected diagnosis of pancreatic neuroendocrine tumor was made. Therefore, we urge clinicians to consider hepatic biopsy in similar cases - generally when it may change prognosis and treatment strategies - and perform histological confirmation of metastatic disease whenever feasible, even if the answer may seem obvious at first impression.

Pancreatic cancer is becoming increasingly relevant, since it is one of the most lethal cancers, estimated to surpass breast cancer deaths by 2017[1], which are considerable, and is being contemplated as a public health issue[1,2]. At the time of diagnosis, most patients have either locally advanced or metastatic disease, thus not meeting surgical criteria - the only treatment offering the potential for a cure[3,4]. Alternatively, the patients may be candidates for systemic palliative treatment, if clinically compatible, or best supportive care. In general, the estimated 5-year survival is 5%[4]. More than 85% of all solid pancreatic neoplasms are ductal adenocarcinoma[3]. On the other hand, pancreatic neuroendocrine tumors are considered rare[5], although with a reported increase in incidence in the last decades[6]. Although little is known about the epidemiology of metastization in this disease, the liver is the preferential site metastatic disease[7] and treatment algorithms are available[8]. The authors present a case of a long-term survivor with an unresectable pancreatic adenocarcinoma, stage III with a later diagnosis of liver metastasis of pancreatic neuroendocrine origin.

A 69-year-old male patient, who was initially evaluated at another institution, presented with new-onset cholestatic jaundice and involuntary weight loss. He had a history of benign prostatic hyperplasia, osteoporosis, chronic gastritis and hiatus hernia, but he was not taking any prescription medications. The patient was diagnosed in July 2013 with a 25-mm mass at the head of the pancreas, with superior mesenteric artery invasion and regional node metastization by computed tomography (CT) scan [Figure 1]. He underwent a biopsy and subsequently was diagnosed with unresectable pancreatic ductal adenocarcinoma, thus considered clinically stage III (cT4N + M0), according to the 7th edition of the AJCC cancer staging manual criteria. 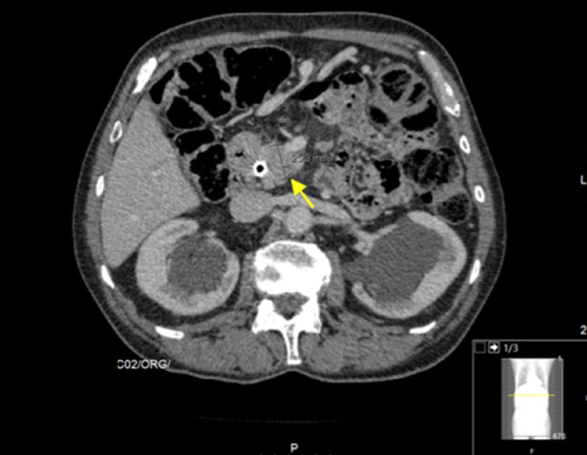 Figure 1. Computed tomography scan at diagnosis (2013). Shown is the pancreatic mass (25.3 mm, yellow arrow), a histologically proven pancreatic adenocarcinoma. A metal stent was placed to relieve symptoms such as jaundice

A metallic biliary stent was placed to reduce jaundice [Figure 1]. The patient was referred to best supportive care by the attending physician at that time, and he approached our institution for a second opinion. At this point, the patient was relieved of cholestatic symptoms and was considered Eastern Cooperative Oncology Group (ECOG) score 0; therefore, systemic treatment was proposed. The patient accepted the proposed treatment and began palliative single-agent weekly Gemcitabine 1000 mg/m2, for 6 months, after which a CT scan was performed in December 2013 showing stable disease (SD). The patient’s carbohydrate antigen (CA) of 19.9 was not considered indicative of disease as it was consistently within normal range values. The multidisciplinary group decision was to further treat with chemoradiotherapy (CRT). The patient started continuous infusional 5-fluorouracil and radiation therapy (RT) was performed concomitantly (50.4 Gray; 28 fractions, 5 x/week, according to Intensity Modulated RT), for 5-and-a-half weeks. The CT scan after CRT in June 2014 showed SD. After this treatment, the patient re-started Gemcitabine until August 2014, after which he began regular clinical and imagiological follow-up. The patient was, shortly after, admitted for cholangitis but fully recovered after antibiotics and fluid resuscitation. The hepato-biliary group re-appreciated the case in August 2015, but still considered it to be unresectable and the patient remained in follow-up. In February 2016 the patient complained of right hypochondrial pain, nausea and vomiting, generalized pruritus and fever. Abdominal ultrasound revealed evident de novo hepatic lesions and elevation of acute inflammatory parameters. The patient was admitted for cholangitis and started on antibiotics and supportive therapy. A CT scan identified an intrahepatic abscess which was drained percutaneously [Figure 2]. A Gram-negative bacterium, Escherichia coli, was identified in blood cultures as well as in the drained pus and the patient was discharged after full recovery.

Figure 2. Computed tomography scan performed when the patient was admitted for cholangitis. A liver abscess (yellow arrow) was diagnosed. It was later percutaneously drained and E. coli was identified

A CT scan was performed in May 2016, and identified several de novo small nodular masses (the biggest at 18 mm) on hepatic segment VI, highly suggestive of metastization. The known cephalopancreatic lesion of 15 mm [a Sustained Partial Response according to Response Evaluation Criteria In Solid Tumors (RECIST) criteria, three years after the initial pancreatic adenocarcinoma diagnosis]. Additionally, the prostate was measured, revealing a transversal diameter of 50 mm with a hypervascular peripheral nodule. An osteoporotic fracture of L3 was diagnosed, but no diagnostic workup was performed at this point. A magnetic resonance imaging (MRI) scan was requested to further characterize the findings, but in the meantime the patient was again admitted with a cholangitis diagnosis. The MRI revealed heterogeneous hepatic steatosis and multiple bilobar hypervascular solid hepatic nodules (the largest at hepatic segment VI with 26 mm, Figure 3A). Pancreatic adenocarcinoma metastasis was suspected at this point.

Figure 3. Imagiological and functional evaluation at the time of diagnosis of the liver metastasis (2016) (A) MRI showing histologically confirmed neuroendocrine tumor liver metastasis (26 mm) and (B) functional and radiological evaluation with PET 68Ga-DOTANOC showing high uptake in a hepatic lesion in segment VI; the remaining parenquima was heterogeneous, without focal uptake; additionally, high uptake was noted on the head of pancreas (suggesting the primary tumor) and one regional lymphatic node. PET: positron emission tomography; MRI: magnetic resonance imaging

The patient’s ECOG score was 0. Considering the possible differential diagnosis (namely metachronous metastization from pancreatic cancer, prostatic cancer or unknown primary malignancy, primary hepatocarcinoma or even non-malignant causes such as hepatic abscesses), each with different therapeutic and prognostic approaches, the lesions were biopsied. In August 2016 the histological exam showed cells with uniform nucleus, round to oval, with fine chromatin and absent or inconspicuous nucleolus; ample and eosinophilic cytoplasm. The immune-histochemical study of the hepatic lesions revealed AE1/AE3+, chromogranin+, synaptophysin+, HepPar1-, CK903- and CK7- with a Ki67 index of 14% revealing hepatic involvement by a neuroendocrine tumor [Figure 4]. 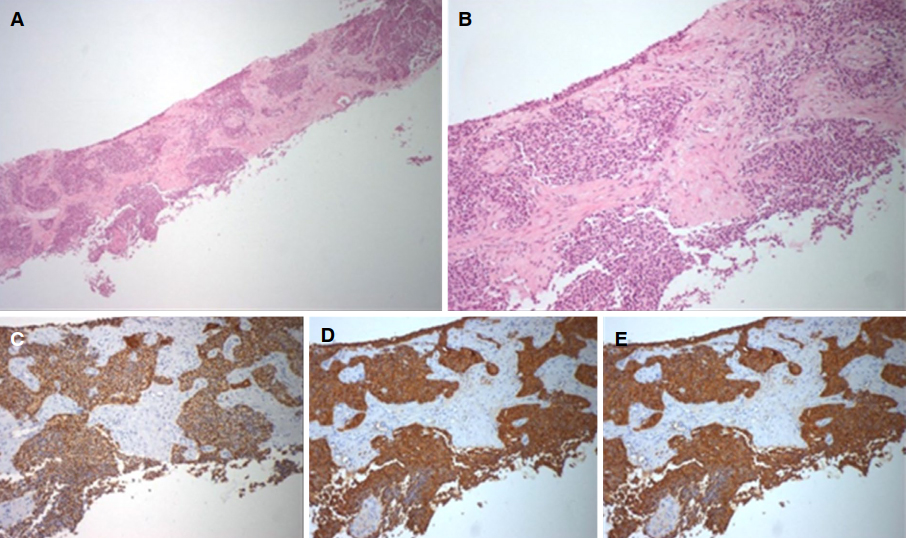 Figure 4. Biopsy of the liver mass (2016). (A) hepatic parenquima with involvement of solid epithelial neoplasia (40x); (B) cells with uniform nucleus, round to oval, with fine chromatin and absent or inconspicuous nucleolus; ample and eosinophilic cytoplasm (100x); immune-histochemical study of the hepatic lesions revealing AE1/AE3+ (C), chromogranin+ (D) and synaptophysin+ (E)

The initial diagnosis of the pancreatic mass was reviewed at our institution and confirmed pancreatic adenocarcinoma without neuroendocrine differentiation. These findings were supported by performing a Positron Emission Tomography 68Gallium [Figure 3B]. Shortly after the diagnosis and full staging, the patient fell and developed a femoral fracture which considerably affected his performance status; he was mostly bedridden. Treatment of the neuroendocrine tumor was no longer feasible. Unfortunately, the patient’s health then further deteriorated, and he eventually succumbed to hepatic failure due to progressive extensive liver metastization.

Regarding the first point, pancreatic adenocarcinoma appears to have very different biological behaviors and diverse responses to treatment that are evident in the clinical practice. Specifically in the locally advanced uresectable setting, no matter what treatment strategy is decided upon, the average survival for these patients remains disappointingly low - less than one year[4]. Individual factors may have prognostic implications, such as non-functioning Lewis enzyme, since almost 10% of patients have normal CA 19.9 levels[4], which is actually associated with longer survival[1], as in this case; nonetheless, this is infrequently seen in clinical practice. The patient described here is an example of a long-term survivor patient with a progressively smaller pancreatic adenocarcinoma mass (probably due to ongoing RT lethal effects) with an apparent aggressive disease at diagnosis, with a mostly clinically silent cephalopancreatic lesion with vascular invasion.

Considering the second point, in spite of pancreatic adenocarcinoma being the obvious diagnosis for hepatic metastization, some aspects should prompt a biopsy decision (vs. assuming origin from the previously diagnosed primary tumor): The time interval between the primary cancer diagnosis and metastasis diagnosis (a gap of more than three years), the current partial response status of primary disease (making less probable the presence of progressive disease elsewhere), and other confounding and competing possible causes such as other malignancies - a risk that in general increases with age-prostate cancer, unknown primary or even non-malignant causes, such as hepatic abscesses, in light of previous episodes of organized pyogenic cholangitis with need of percutaneous drainage. At this point, we cannot exclude that the possibility that the initial pancreatic tumor could have had neuroendocrine foci that later developed. We can speculate that it is possible that the initial biopsy did not include those components or a second primary tumor arose independently - either way, the histological characterization of the lesion was considered useful, since it could have different diagnostic, prognostic and therapeutic implications, especially since it can be a mostly safe and ambulatory procedure. For example, in much-discussed breast cancer cases, even though performing a biopsy of suspected metastases is recommended in guidelines, it is not always performed in routine oncology practice - most often due to costs and/or invasiveness of the procedure[9].

Lastly, the third point: focus on pancreatic neuroendocrine tumor is generally considered to have a better prognosis than pancreatic adenocarcinoma, but this naturally varies according to tumor location, staging, and metastization pattern among other individual factors. Such rare tumors should ideally be managed in reference centers dedicated to diagnosing and treating them[8].

Of note, the simultaneous diagnosis of pancreatic adenocarcinoma and neuroendocrine tumor is indeed very rare[10]. In this particular case report, unexpectedly, the patient actually died due to hepatic failure that developed relatively quickly, and which impeded any possibility of systemic treatment.

Therefore, we conclude that patients should not be denied a treatment opportunity, if clinically compatible, solely based on their advanced disease status, especially if based on theoretically low expectations of tumor response or predicted prognosis. On the other hand, tumors perceived as less aggressive may prove fatal if not timely and effectively dealt with. We urge clinicians to consider hepatic biopsy in similar situations - generally when it may change prognosis and treatment strategies - even if the answer may seem obvious at first.

The authors would like to thank Gabriel Gonçalves Fagundes for proofreading the manuscript; and would like also to thank Mariana Afonso, MD, and Ana Luísa Cunha, MD, at the Pathology Department of the Portuguese Oncology Institute, for the help at handling pathology images.

The authors have no conflict of interest. 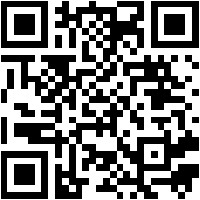