1Department of Obstetrics and Gynecology, , .

Breast cancer is a common malignancy among women. Due to the improvement of social awareness and advances in imaging technologies, significant achievements are obtained at its diagnosis and treatment each passing day. A 54-year-old, multiparous and postmenopausal woman, who presented with a palpable lymph node in the right supraclavicular region and a right adnexal mass but had no findings from the breast examination, is reported in this article. Following advanced assessment, metastatic carcinoma was identified in the lymph node biopsy and the adnexal mass. During the exploration for the primary origin, microinvasive breast cancer was diagnosed following mammographic imaging and an excisional biopsy from the right breast. Microinvasive breast cancer, which did present itself with clinical findings with metastases despite the lack of local findings, was discussed with the review of the literature.

In this article, we present a case of microinvasive breast cancer that presented clinical findings with supraclavicular lymph node involvement and ovarian metastasis without any findings from breast examination. We found it to be interesting, due to the rarity of such cases.

A 54-year-old patient (Gravida 4, parity 3, 3 years since menopause, gave birth to her last child 20 years ago) was visited due to the complaint of a palpable lymph node at the right supraclavicular region. Due to the finding of a metastatic carcinoma at the lymph node after thin needle aspiration biopsy, she was investigated with imaging and systemic examination in order to find the primary focus. Systemic examination only demonstrated a palpable lymph node, which was 2 cm × 3 cm in size, at the right supraclavicular region. No other abnormal clinical finding was detected. A solid, mobile mass was found at the right adnexal region during gynecologic examination. The mass was 6 cm × 7 cm in size. Pelvic ultrasonography of the left adnexa and the uterus was normal regarding the patient’s age. The lesion, which seemed to be originating from the right ovary was measured to be 65 mm × 72 mm in size. No free abdominal fluid was present. Ultrasonography of the upper abdomen and the physical examination of the breast was normal. Cervical smear, endometrial sampling, endoscopy of the gastrointestinal system, routine biochemical tests and complete blood count resulted in the normal range.

Positron emission tomography-computerized tomography (PET-CT) showed increased F-18 fluorodeoxyglucose (FDG) uptake at both supraclavicular lymph nodes, especially more prominent on the right cervical level. In addition, increased uptake of FDG was also present at the lymph nodes in thorax and abdomen. The mass lesion, whose margins were not distinguishable from the uterus, was located in the right adnexal region and showed increased F-18 FDG uptake. These radiological findings in the right adnexal region supported the diagnosis of primary gynecological malignancy.

The case was reviewed in the gynecological oncology council of our institution. The decision was to perform diagnostic laparotomy in order to confirm the primary focus. The patient underwent surgery. A firm, solid mass with lobulated margins and 6 cm × 7 cm in size was observed during laparotomy (Figure 1: macroscopic appearance of the tumor located at the right adnexal region). The contralateral ovary and genital structures, pelvic structures, organs of the upper abdomen were in normal appearance. Frozen examination of the mass from the right adnexal region was reported as malignant metastatic tumor. Due to this result staging surgery was performed. 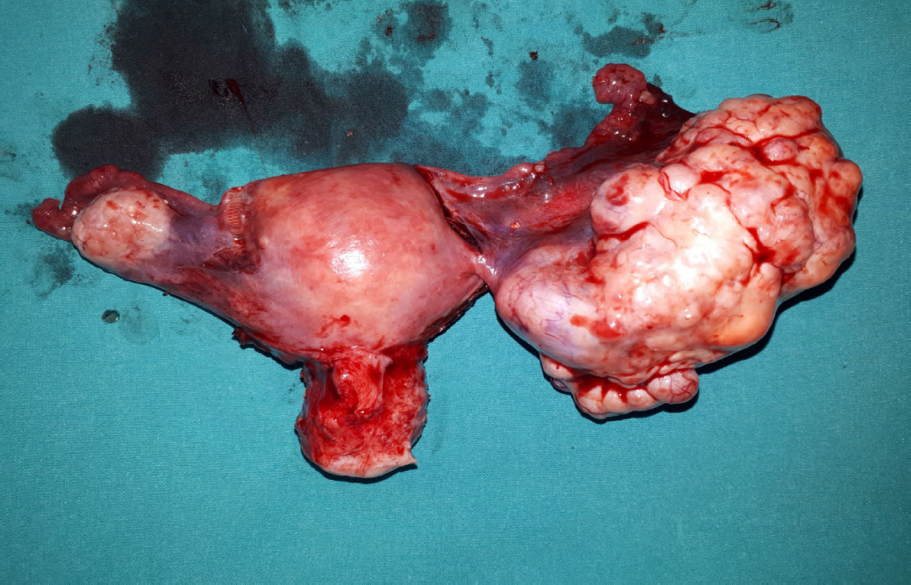 Figure 1. Macroscopic image of the tumor located in the right ovary

The paraffin sections of the removed mass were examined by our pathology department and the diagnosis of metastatic carcinoma at the right ovary was confirmed (Figure 2: the microscopic image of the metastatic tumor located at the right ovary). The morphology of the metastatic tumor was reported as lobular carcinoma and it was concurrently examined with the histopathology of the previously removed excisional biopsy material from the right breast. After the examination, the ovarian mass was diagnosed as a metastasis of the primary breast cancer. The immunohistochemical findings at the ovarian tumor are as follows: ER positive, PR negative, Pax8 negative, Wilms’ tumor 1 negative, gross cystic disease fluid protein-15 focal positive, GATA3 positive, epithelial membrane antigen positive, Ber-Ep4 positive; these findings supported the diagnosis for a malignant epithelial tumor but excluded a primary ovarian carcinoma. The lesion at the right breast, which appeared as a single focal lesion in imaging studies, was removed with clear margins. Therefore, no secondary surgery for local control was considered. After the abdominal surgery, the patient received the following chemotherapy treatments: 8 cycles of herceptin and docetaxel and subsequently 8 cycles of trastuzumab and pertuzumab. She undergoes examination every three months and has been disease - free for 12 months as this report is written. 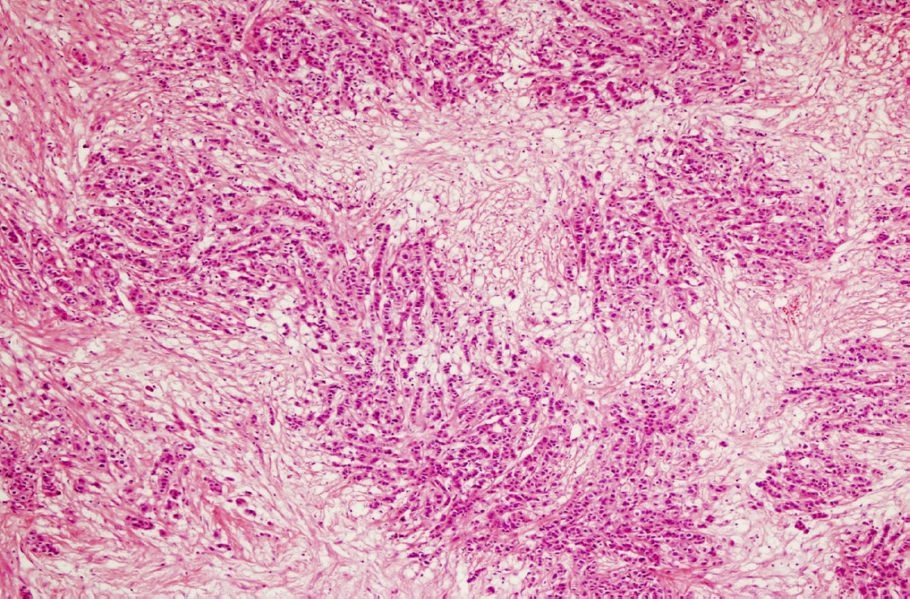 In spite of the advancements in its diagnosis and treatment, breast cancer continues to be fatal. Because of the fact that it can spread both locally and distantly simultaneously, breast cancer is considered to be a systemic disease from the beginning.

Three point five to ten percent of the breast cancer cases present findings with distant metastasis at the moment of diagnosis[8,9]. Microinvasive breast cancer presented clinical findings with supraclavicular lymphadenopathy and adnexal mass. Positive ER (which was focally 5%-10% positive in this case), negative PR and increased expression of human epidermal growth factor receptor 2 (HER2) may be the molecular features that are responsible for such aggressive spreading of the tumor[10]. One to seventeen percent of all malignant ovarian tumors are metastatic. Breast, gastric and colon cancers are the most common cancers that metastasize to the ovary[11]. Contrary to our case, 70% of the metastatic ovarian tumors are bilateral. Distinction of primary and metastatic tumor is essential for determining the treatment approach and prognosis. Tumors metastasizing to the ovary from non-genital organs are associated with poor prognosis. Five-year survival rate for primary ovarian cancer is 40%, whereas in case of metastasis from non-genital organs the rate becomes 12%-24%, and the mean survival is 15 months[11,12]. Survival depends on the prognosis of the primary tumor and when the tumor presents findings with metastases before itself, the prognosis is poorer[12].

Debulking surgery has a role in patients with metastatic ovarian tumors that originate from non-genital organs, however it is not established that which patients are going to benefit from this technique of surgery[12,13]. Yet we consider it worthwhile, because it reduces the required amount of time for final diagnosis and the tumor burden prior to chemotherapy. The patient undergoes regular clinical controls and has been disease free for 12 months.

Concerning the diagnosis and management of primary ovarian tumors, serum CA 125 levels are among important markers. Still, it is difficult to tell the same for metastatic tumors[13,14]. Except elevated CA 15-3 levels, other tumor markers (CA 125, CA 19-9, carcino-embryonic antigen, alpha-fetoprotein) were in normal range in our case.

As patient history, laboratory findings and physical examination, radiological examination is also an important means while detecting the primary focus of the tumor. In addition to ultrasonography, mammography, magnetic resonance imaging and CT; PET-CT is also very helpful. Especially during the postmenopausal period, when the ovaries are non-functional, the diagnostic power of PET-CT is higher[11]. Mammography manifested the findings for breast cancer rather clearly. The expectation for broad involvement of lymph nodes and presence of distant metastases was low at the stage of microinvasive breast cancer, therefore the possibility of the right ovarian mass being a second primary malignancy was considered. Although the imaging methods were very revealing regarding the extensiveness of the lesion, they were inadequate for the distinction between primary and metastatic tumor. Consequently, final diagnosis was established with laparotomy[15]. Presence of an adnexal mass, while there is a diagnosis or possibility of breast cancer, should be evaluated carefully regarding increased risk of malignancy.

Distant organ metastasis is beyond expectation at the moment of diagnosis for microinvasive breast cancers. Nevertheless, ovarian metastasis should be kept in mind provided there is involvement of regional lymph nodes and the tumor is histologically lobular type[8,9,16]. Despite the fact that it was not tested at our case, if the immunohistochemistry of the breast tumor is negative for hormone receptors and shows findings like increased expression of Ki-67 and HER2, it should be alarming for increased metastatic potential[4,10,16].

Microinvasive breast cancers constitute a rare subgroup of invasive breast cancers. Since their histological features are better acknowledged and imaging technologies are more enhanced, more patients are diagnosed with the disease in recent years. While it presents a fair survival expectation, systemic spread and metastases may occur in very early phases of microinvasive breast cancers, when it is accompanied with regional lymph node involvement and poor prognostic immunohistochemical factors. Hence, testing for immunohistochemical and molecular markers may provide more information regarding the biology and behavior of this tumor[10]. Metastases from non-genital organs to the ovary are associated with poor survival. Due to the expediting effect on the process of diagnosis and treatment, laparotomy and laparoscopy should be performed promptly as definitive methods. Multidisciplinary approach is the most important principle for the diagnosis and treatment of a malignancy that presents itself with metastases, also for the investigation of the primary focus.

Provided data regarding the patient’s treatment in the department of Obstetrics and Gynecology: Kurt S, Timur HT, Saatli HB

Provided information about the patient’s treatment in the department of General Surgery: Sevinc AI

Provided the pathological findings and other information from the department of Pathology: Ulukus EÇ

The consent form was signed by the patient herself. We foresee no ethical issues regarding the publication of this case report.

The consent form was signed by the patient herself. 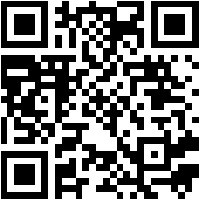