© The Author(s) 2020. Open Access This article is licensed under a Creative Commons Attribution 4.0 International License (https://creativecommons.org/licenses/by/4.0/), which permits unrestricted use, sharing, adaptation, distribution and reproduction in any medium or format, for any purpose, even commercially, as long as you give appropriate credit to the original author(s) and the source, provide a link to the Creative Commons license, and indicate if changes were made.

Aim: Primary tumors can be divided into oncogene-addicted (e.g., lung) and non-oncogene addicted (e.g., breast). Only the former group has an Achilles-heel single gene for successful target therapy, whereas the latter has mutations of multiple causative genes. Currently, tissue biopsy used for genetic surveys do not give a complete picture of the molecular profile and clonal evolution, but only provide static information over time.

Methods: A series of 133 patients with 16 different solid tumors were enrolled. Blood samples were collected and cell-free DNA (cfDNA) was extracted. cfDNA libraries were analyzed using AVENIO circulating tumor DNA (ctDNA) Expanded Kit and Illumina NextSeq 550 for sequencing was used. In order to evaluate the clinical evolution over time, a second cfDNA analysis was performed after a mean interval of 2 months.

Results: Through the cfDNA liquid biopsy, we found 89 pathogenic variants in 54 genes. Breast, lung, and prostate cancers showed the largest number of mutated genes. TP53, PIK3CA, FGFR3, KRAS, and ERBB2 were the most frequently mutated genes among 16 different tumors. Gene distribution didn’t show any type of prevalence. In particular, every patient with disease progression seems to have a “private” combination of gene pair mutations, with TP53 as the most frequently mutated gene.

Conclusion: We showed that the clonal evolution of tumors includes a private combination of genes, regardless of tumor type. In the future, the cancer treatment can be the targeted therapy against specific tumor mutation(s). The present approach seems promising to both identify key cancer genes and follow clonal evolution over time.

Daily experience shows that different malignancies, such as breast or lung cancers, can be controlled using standard protocols for many years before tumor relapse. This is possible thanks to the detection of the so-called “Achilles’ heel” that represents the molecular target for different tumor groups named “oncogene addict”[1]. However, only a few tumors have a unique or a small number of mutated genes that could be susceptible to target therapy, whereas the vast majority of cancers are “non-oncogene addicted”[1]. Tissue biopsies from primary tumors usually do not show details of molecular heterogeneity and are even less informative when obtained from metastases. Additionally, biopsies from metastases are not always easy to perform[2].

Cancer is an evolving microcosm driven by selective pressures due to the environment and drug therapy. Malignant cells are in competition and/or cooperation with each other and with the surrounding environment[3]. Cancer therapy must cope with the cellular complexity of the disease and face its dynamic evolutionary aspect[4]. In order to facilitate treatment choice, it is crucial to distinguish between germline and somatic mutations. New technologies such as the liquid biopsy of cell-free DNA (cfDNA) facilitate proper detection of somatic tumor mutations, which are the key mutation of specific cancer driver genes. The technique is non-invasive, is a valuable alternative to physical biopsies, and opens new avenues for personalized medicine[5].

The second liquid biopsy proves to be a powerful tool to understand which pair of mutated genes is specific for the patient and unique to him, thus leading to a fully personalized treatment.

Our cohort has been enrolled at the Medical Genetics Unit of the Azienda Ospedaliera Universitaria Senese, Siena, Italy for diagnostic purposes. The cohort consisted of 133 patients with different solid tumors who experienced disease progression after standard therapy. Patients were previously treated in advanced/metastatic settings and most of them were not eligible for curative treatment. Written informed consent and assent for genetic analysis was obtained from all patients.

Inclusion criteria provided patients with either locally advanced or metastatic solid tumors independent from the primary tumor site. Patients were excluded if they had early-stage solid tumors and still have to experience all possible pharmacological treatments of standard guidelines. The main information collected for each patient includes oncological data, family tree, and cancer history in a genetic consultation setting.

From March 2018 to July 2020, a total of 133 patients with locally advanced or metastatic solid tumors were enrolled at Azienda Ospedaliera Universitaria Senese, Siena, Italy, and included in the study. The mean age of patients at the first cfDNA analysis was 56 years (range 2-83 yrs); 48% of patients were females and 52% were males. Out of 56 patients who did at least a second liquid biopsy, 22% had cancer from breast, 14% lung, 14% ovarian cancer, 5% colorectal, 6% pancreas, 6% prostate, whereas uterine cancer, retinoblastoma, cholangiocarcinoma, and gastric cancer accounted for 2% each, and soft tissue sarcoma (including right infratemporal fossa, oral, pharynx, and larynx), Wilms’ tumor, and glioblastoma accounted for 1% each of the entire series. The median follow-up time for all patients was 2 months (range 1-6 months).

Next-generation sequencing (NGS) analysis in 133 patients at the first liquid biopsy identified 86 clinically meaningful pathogenic variants in 54 genes allowing to pick up key mutations in 67.6% (n = 90) of cases [Supplementary Table 1]. After a mean of 2 months, a second liquid biopsy was performed and 87.5% of patients remained/became positive. Table 1 summarizes all the mutated genes resulting from the second liquid biopsy associated with different tumor types. Mainly, the breast, lung, and prostate cancers were the tumors types that showed the largest number of mutated genes. The tumor type, grade, and stage as well as the drug treatments for the entire cohort of second liquid biopsy patients are summarized in the Supplementary Table 1.

Figure 1. Distribution of the most frequently mutated genes. Among the 38 mutated genes, point mutations in TP53, PIK3CA, KRAS, and ERBB2 and copy number variation in FGFR3 were the most commonly observed alterations in all 16 tumor types

However, clonal mutation was not confirmed in the entire cohort at the second liquid biopsy. Indeed, 9 patients resulted as negativized, 13 patients had only one mutated clone, and 18 had two clones. One patient had 5 mutated clones [Figure 2].

The most frequent mutations in our cohort were in the TP53 gene, regardless of the primary tumor type. TP53 was usually mutated in association with another gene [Figure 3]. The most mutated genes in combination with TP53 were EGFR and PIK3CA in 20% of cases, KRAS and ERBB2 in 16% of cases, FGFR3 and BRCA2 in 15% of cases, or less frequently with other genes for a total number of 14 genes. 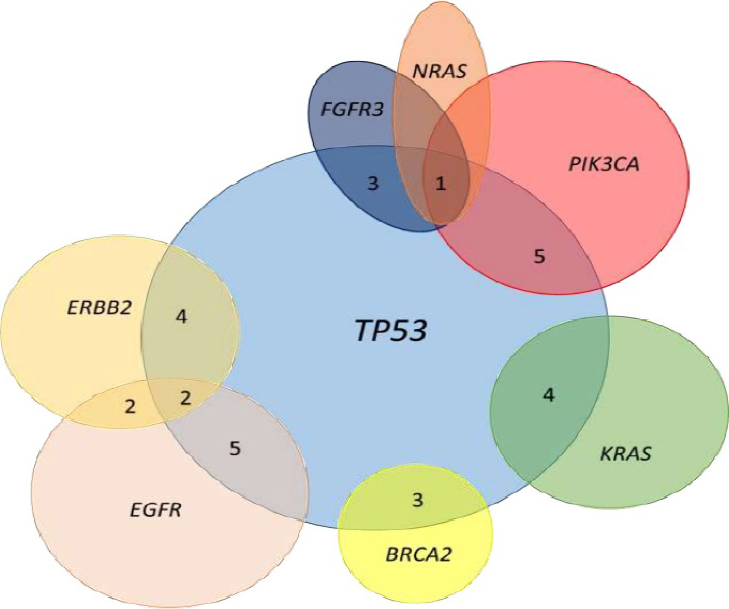 Early dissemination of resistant tumor cells is the major cause of metastatic recurrence in cancer patients[6]. Currently, tissue biopsy remains the gold standard. However, it is jeopardized by the wide heterogeneity that is frequently found between different regions of the same tumor (spatial heterogeneity), as well as between the primary tumor and local or distant recurrences in the same patient (temporal heterogeneity)[7]. Intratumor heterogeneity can lead to underestimation of the tumor genomics landscape portrayed from single tumor-biopsy samples and may represent a major challenge towards personalized-medicine and biomarker development[8]. For this reason, liquid biopsy could be of primary importance to obtain a complete scenario of the molecular profile of all tumor metastases. Indeed, the cfDNA is the results of fragmented genomic DNA coming from the apoptosis or necrosis process of normal and tumoral cells. Performing the NGS-liquid biopsy on the cfDNA guarantees the total representations of the molecular information coming from the totality of metastasis.

In accordance with previous data in the literature, our study confirmed that SNVs (small nucleotide variants) in TP53, PIK3CA, and KRAS, and CNVs (copy number variations) in FGFR3 and ERBB2 are the most commonly observed mutated genes in breast and lung cancer[9-10][Figure 1]. However, these mutations are not only confined to breast and lung cancer but are also found in other types of cancer without a specific prevalence in distribution [Figure 1].

In comparison with data from our previous study[5], showing that at the beginning of tumor expansion there was a consistent, although variable, mutational burden from tens to hundreds, disease relapse is generally characterized by a “driver” clone that is responsible for metastases. The curve in Figure 2, simulating a Gaussian bell shape (similar to the typical population curve), underlines this concept. Indeed, it shows that in metastatic patients, a negative selection occurs in the initial number of mutated clones, reducing them to a maximum of two in comparison to the considerable number of tumor clones in the early stages of the disease.

In particular, in relapsing patients, the second liquid biopsy showed that 37% had two mutated clones, 26% only one clone, and 18% more than two clones [Figure 2].

Notably, one of the two mutated genes was often TP53 associated with PIK3CA (20%) or EGFR (20%), KRAS (16%) or ERBB2 (16%), FGFR3 (15%) or BRCA2 (15%), and other genes with a lower frequency [Figure 3]. We hypothesize that tumor survival does not depend only on the expansion of the TP53 clone, but also requires a mutation in other genes for tumor progression. In fact, we have repeatedly found that in breast cancer, the TP53 mutation is associated with PIK3CA. Indeed, PIK3CA mutations generally arise in advanced stages of breast carcinogenesis from dysplasia to carcinoma in situ[11] resulting in a greater potential to migrate and invade in vitro, as well as to metastasize[12]. Moreover, in lung cancer, TP53 was frequently associated with KRAS mutation.

A striking finding deriving from the comparison between the first and the second liquid biopsy in the same patient has been the constant reduction in the number of mutated genes. Present data suggest that after the early phase of tumor diffusion, that is characterized by a great number of new somatic mutations, a selection takes place among the various mutated genes to determine which are the most effective clones for tumor progression.

In a small subset of patients, we were able to perform a third liquid biopsy, but numbers for the moment were too small. Data from the third biopsy, in case of further tumor relapse, will better elucidate the trend in tumor progression, showing further reduction of the number of clones, or a new increase of “random” mutations.

In conclusion, additional study in larger series is required for further confirmation of these preliminary data and suggestions. A greater use of liquid biopsy is recommended for proper detection of genetic mutations and for “the right treatment in the right patient at the right time”.

Authors thank the support from the Regione Toscana - Istituto Toscano Tumori (ITT) (Project “Identification of genetic bases of individual predisposition to lung cancer in non-smokers”) and the ASSO (Associazione per lo Sviluppo della Scienza Oncologica) Onlus. This work was, in part, supported by the MIUR project “Dipartimenti di Eccellenza 2018-2022” to the Department of Medical Biotechnologies, University of Siena”. This work is generated within the ERN-EURACAN (European network for Rare Adult Aolid Cancer).

Performed the experiments, analyzed the data and wrote the paper: Palmieri M

Took care of the clinical part of the study: Fava F, Fabbiani A

Designed the research strategy, analyzed the data, and wrote the paper: Renieri A, Frullanti E.

The data that support the findings of this study are available from the corresponding author upon reasonable request.

The consent to participate was obtained from patients included in the study.

The consent for publication was obtained from patients included in the study. 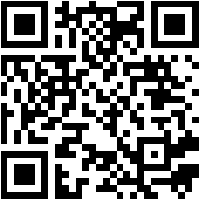