Aim: Murine tumour cell lines have been used in thousands of studies. Strikingly, it is rather the rule than exception for most of them that not much is known about their genetic characteristics. The squamous cell carcinoma (SCC) cell line KLN 205 is such an example. KLN 205 cells have not been studied yet for karyotype or acquired copy number variations (CNVs), but they have been used as models for (metastatic) lung cancer, lung-SCC, non-small cell lung cancer, tongue cancer and subcutaneous SCC. Here, it was characterised cytogenomically for the first time.

Methods: The cell line KLN 205 was characterised comprehensively by molecular cytogenetics using multicolour banding as well as molecular karyotyping. Based on these results, a map of the imbalances and breakpoints determined in the murine genome was translated to the human genome.

Results: Here, it could be shown that this > 40-year-old cell line has a stable, approximately tetraploid karyotype comprising 77-82 chromosomes. However, there are few structural chromosomal aberrations: only six derivatives involving chromosomes 2, 3, 5, 9, 10 and/or 19 could be found. According to the literature, SCCs derived from different human tissues, as well as lung SCC and non-small cell lung cancer, display overall similar CNV patterns.

Conclusion: Thus, according to the genetic profile found here, KLN 205 can be applied as a general model for human SCC; it is also suited as a model for lung cancer in general. Further molecular genetic characterisation of KLN 205 cell line may find more lung- and/or SCC-specific alterations.

Among the leading adverse forms of acquired malignant diseases is human lung cancer representing ~17% of new cancer diagnoses worldwide. About 30% of lung-associated cancers are of squamous cell carcinoma (SCC) type[1], and it has been shown that 80%-90% of lung SCCs (L-SCCs) are associated with tobacco consumption, i.e., smoking[1,2]. Being a long-standing clinical problem, there are numerous therapeutic options at hand, such as carboplatin- or cisplatin-based cytotoxic chemotherapy, EGFR targeting therapy (e.g., by erlotinibin or cetuximab), anti-angiogenesis treatment by ramucirumab or approaches targeting the immune system with specific inhibitors, e.g., ipilimumab or nivolumab[1]. However, not all L-SCC patients can be treated optimally using the currently available options, thus research on, e.g., how to access the FGFR[3], IGF[4] or PI3K-Akt/mTOR pathways[5], is ongoing.

Thus, the murine cell line KLN 205 (also referred to as KLN205 or KLN-205), being derived from a chemically induced tracheal SCC in 1978[8], has also never been characterised using cytogenetics, molecular cytogenetics or molecular karyotyping, even though it has been applied in almost 100 studies. Only the modal chromosome number was determined as being between 73 and 76[9]. The cell line was induced in the lung of a male DBA/2 mouse by repeated intra-tracheal injections of 3-methylcholanthrene. Then, the tissue was serially passaged in DBA/2 mice intramuscularly, and the 9th and 10th transplant generations were further used as “Nettenheim carcinoma”[10], known to be composed of heterogeneous cell populations[9]. Nettenheim carcinoma has been classified as tracheal SCC, as well as been called lung carcinoma, from which the cell line KLN 205 was established by serial sub-cultivation and subcloning[10]. Interestingly, the American Type Culture Collection provides the cell line as “forming metastatic lesions in lungs after inoculation into mice” and “SCC cell line”[11]. Overall, there seems to be some confusion regarding for which human tumour KLN 205 cells can be used as models. Accordingly, the KLN 205 cell line has been used in studies considering, for example, the following types of cancer:

It was shown previously that a comprehensive molecular cytogenetic characterisation of murine tumour cell lines can define the cancer subtype to which they belong because the cytogenomic profile of chromosomal imbalances is typically specific to a certain tumour type[6].

Thus, the karyotype, a comprehensive map of chromosomal imbalances, and an in silico translation of these results to the human genome were performed here for the KLN 205 cell line to possibly determine to which human cancer type it is most similar.

The murine KLN 205 cell line (American Type Culture Collection, ATCC CRL-1453™; Wesel Germany) was grown adherently according to the recommendations of the provider. The cells were cytogenetically worked up[28] and the whole genomic DNA was extracted from the same passage of cells[29]. Molecular cytogenetic and molecular karyotyping [array comparative genomic hybridisation (aCGH)] analyses were done as outlined below.

The KLN 205 cell line was specifically purchased for this study from ATCC. The provider guaranteed the identity of the cell line.

Imbalances and breakpoints of KLN 205 were determined according to mcb and aCGH data and aligned to human homologous regions using Ensembl and the UCSC Genome Browser, as previously described[29]. The obtained data were compared to the known genetic changes in human cancers[30-32].

Figure 1. Murine multicolour banding (mcb) was applied on chromosomes of the KLN 205 cell line. This figure depicts the summary of 20 chromosome-specific FISH experiments as typical pseudo-colour banding. Derivative chromosomes consisting of different chromosomes are highlighted by frames and shown twice in this summarising karyogram.

Overall, the FISH results are in agreement with those of the aCGH analysis, as summarised in Figure 2A. An in silico translation of those results to the human genome (only imbalances larger than 3.5 megabase pairs were included in the evaluation) identified the corresponding homologous region in the human genome [Figure 2B]. The genomic details are presented in Supplementary Table 1. The aCGH results for murine Y-chromosome are not informative. 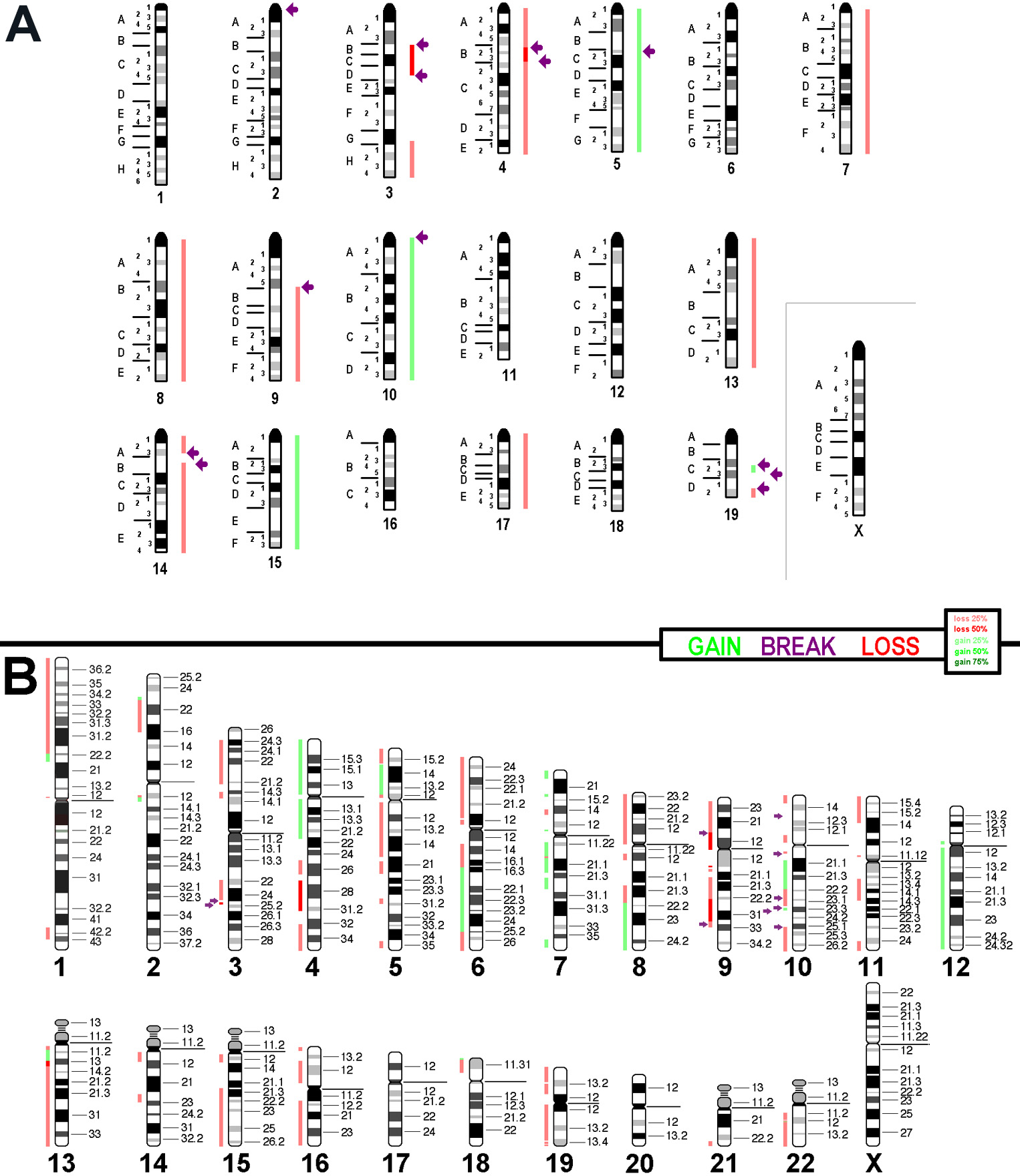 Figure 2. aCGH results and copy number variations detected in the KLN 205 cell line are summarised here with respect to a diploid-basic karyotype. Gains are shown as green bars, losses are shown as red bars and breaks are registered as arrows. (A) The imbalances found in the cell line depicted along a murine chromosome set. (B) The results translated and projected along the human chromosome set.

The KLN 205 cell line has been applied in around 100 published research studies. While morphologically it seems non-negotiable that KLN 205 in culture appears similar to SCC cells[12-14,24,25], they have been applied as models for lung cancer in general[15-22], metastatic lung cancer cells[26] and even non-small cell lung cancer[23]. Surprisingly, they have even worked as a model for tongue cancer[27] and subcutaneous SCC[28].

The present study showed that KLN 205 had an overall stable, approximately tetraploid karyotype with 77-82 chromosomes per cell. Thus, this > 40-year-old cell line still has about the same chromosome number as reported in 1980[9]. Tetraploidisation was found to obviously have been an early event, possibly already being present in the original tumour or acquired during cell line establishment and early adaptation of the cells to culture conditions[6]. Structural chromosomal aberrations are in the lower range of tumour cell lines (see, e.g., the NIH3T3 line[7]). Thus, the use of KLN 205 as a model for metastatic cancer cells[26] is not justified based on the chromosomal aberrations.

Reviewing the literature, SCCs, independent of their localisation, show relatively few differences in terms of acquired CNVs. It has been stated for HNSCCs that they have a rather uniform CNV pattern, irrespective of whether they derive, e.g., from the larynx, oesophagus or tongue[33]. The same was found when comparing HNSCCs and L-SCCs in this study [Table 1]. In addition, it has been shown that the patterns of gains and losses in human lung cancer (SCC-type) and human small cell lung cancer type are strikingly similar as well[31]. Thus, their use as models for SCC cells in general[12-14,24,25] or even for subcutaneous SCC[28] seems to be justifiable. In addition, considering their genetic background, KLN 205 can use as a model for lung cancer in general[15-22], as as well as for even non-small cell lung cancer[23]. Their use as a tongue cancer model[27] would only be appropriate if SCC is the cancer type being assessed.

In conclusion, according to the genetic profile of tetraploid KLN 205, this cell line is primarily a model for human SCC. It can also be used to study lung cancer, not restricted to L-SCC, due to the general similarities of CNVs in lung cancer in general. This study may be the starting point for further genetic characterisation of this interesting cell line by other cytogenomic approaches, including second-generation sequencing.

Developed the idea for the study and got funded for it: Liehr T

Did the FISH-studies: Azawi S

All authors agreed on final draft.

According to the ethical committee (medical faculty) and the Animal Experimentation Commission of the Friedrich Schiller University, there are no ethical agreements necessary for studies involving murine tumour cell lines such as KLN 205. 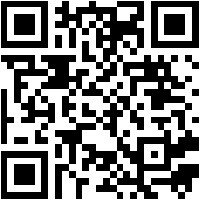