© The Author(s) 2022. Open Access This article is licensed under a Creative Commons Attribution 4.0 International License (https://creativecommons.org/licenses/by/4.0/), which permits unrestricted use, sharing, adaptation, distribution and reproduction in any medium or format, for any purpose, even commercially, as long as you give appropriate credit to the original author(s) and the source, provide a link to the Creative Commons license, and indicate if changes were made.

Aim: Definitive chemoradiotherapy (dCRT) is the standard treatment for locally advanced unresectable esophageal squamous cell carcinoma (LU-ESCC). This study aimed to describe the results of dCRT for T4 ESCC and evaluate the pretherapeutic predictive factors of the outcomes.

Methods: A total of 133 patients with T4 ESCC who received dCRT were grouped into those who achieved a complete response (CR) or those who had residual disease (RD). The clinicopathologic variables were compared between the groups and the overall survival (OS) was evaluated. The predictive factor of RD was assessed and the prognostic factor for OS was identified.

Conclusions: Among the patients who underwent dCRT for LU-ESCC, 23% achieved CR, and the long-term outcome of these patients was favorable. Increased levels of pretherapeutic serum squamous cell carcinoma antigen were also found to be predictive of treatment failure.

Definitive chemoradiotherapy (dCRT) has been the only modality to provide a cure for locally advanced unresectable ESCC (LU-ESCC) without distant metastasis. In Japan, the Esophageal Cancer Practice Guidelines have suggested only weak evidence for recommending radial chemoradiotherapy for treatment of stage IVa esophageal cancer according to the results of several clinical trials[6-9], while dCRT with cisplatin plus fluorouracil (FP) and irradiation has been commonly utilized for these patients.

There exist only a few actual clinical reports that have included a sufficient number of patients receiving dCRT for LU-ESCC[10]. Moreover, pretherapeutic predictors for responses and prognosis have not been well-elucidated[10]. We had previously reported that pretherapeutic serum squamous cell carcinoma antigen (SCC-Ag) levels were associated with poor response to neoadjuvant treatment and prognosis in patients with ESCC[11,12]. However, the predictive value of serum SCC antigen in patients undergoing dCRT remains unknown.

The present study aimed to uncover the actual clinical practice of dCRT for LU-ESCC with relatively large sample size and determine the pretherapeutic predictive factors for treatment response and prognosis among patients with dCRT for LU-ESCC.

This retrospective single-center study included 133 patients with LU-ESCC who received dCRT between April 2005 and March 2019 at the Cancer Institute Hospital of Japanese Foundation for Cancer Research. Here, LU-ESCC comprised tumors that directly invaded neighboring vital organs (T4b tumors, primary tumor invasion) and those wherein regional metastatic lymph nodes invaded neighboring organs (non-T4b tumors, metastatic node invasion). Patients with supraclavicular lymph (M1) were included in the analysis; however, those with supraclavicular lymph node metastasis but without LU-ESCC and those with other distant metastasis were excluded from the analysis. A multidisciplinary tumor board conducted pretreatment evaluation for LU-ESCC mainly according to endoscopy and contrast-enhanced computed tomography (CT) findings. Positron emission tomography, magnetic resonance imaging, and bronchoscopy were performed as needed.

The included patients were classified into two groups: the complete response (CR) group consisted of patients who achieved CR following treatment, and the residual disease (RD) group consisted of those who had residual cancer lesions even after treatment. In this study, CR was determined using endoscopy and CT findings indicating the absence of both primary tumors and lymph node metastases, although biopsy specimens were not required for confirming negative cancer cells. Moreover, in this study, CR was confirmed when patients underwent no cancer treatment without apparent cancer progression at least 1 year after treatment.

Clinical characteristics and survival rates were compared between both groups, and pretherapeutic clinical factors for RD and poor prognosis were identified. Our study protocol was reviewed and approved by the ethics committee of the Japanese Foundation for Cancer Research.

Continuous variables are presented as medians and ranges. Statistical comparisons among groups were conducted using the t-test or chi-squared test, while multivariate logistic regression analysis was used to calculate the odds ratio (OR) and 95% confidence intervals (CIs) for RD. The cutoff serum SCC-Ag level predictive of RD, which was 1.6 ng/mL, was determined using receiver operating characteristic curve analysis. Overall survival (OS) was evaluated from the date of dCRT initiation until death due to any cause or last follow-up. Cumulative survival was estimated using the Kaplan-Meier method, while the Cox proportional hazard regression model was used to elucidate the impact of variables on survival, with results presented as hazard ratios (HRs) and 95%CIs. Multivariate models using stepwise selection were used for adjusting for pretherapeutic confounders, including age at dCRT, sex (female vs. male), main tumor location (infracarina vs. supracarina), serum SCC-Ag level (≤ 1.6 ng/mL vs. > 1.6 ng/mL), Glasgow prognostic score (0, 1, and 2), clinical T stage [non-T4b (metastatic node invasion) vs. T4b (primary tumor invasion)], clinical N stage (N0-1 vs. N2-3), and clinical M stage (M0 vs. M1). A probability (P) value of < 0.05 was considered statistically significant. All statistical analyses were performed using R Statistics (The R Project for Statistical Computing; https://www.r-project.org)[15].

The characteristics of eligible patients are summarized in Table 1. The median age was 63 years, with males accounting for 77% (n = 103) of the patients. Tumors were located at the supracarinal and intracranial esophagus in 56 (42%) and 77 (58%) patients, respectively. Among the patients, 102 (77%) had T4b primary tumors. Additionally, 41 (31%) patients had supraclavicular lymph node metastasis, and 31 (23%) had lymph node metastasis invading the neighboring organs. 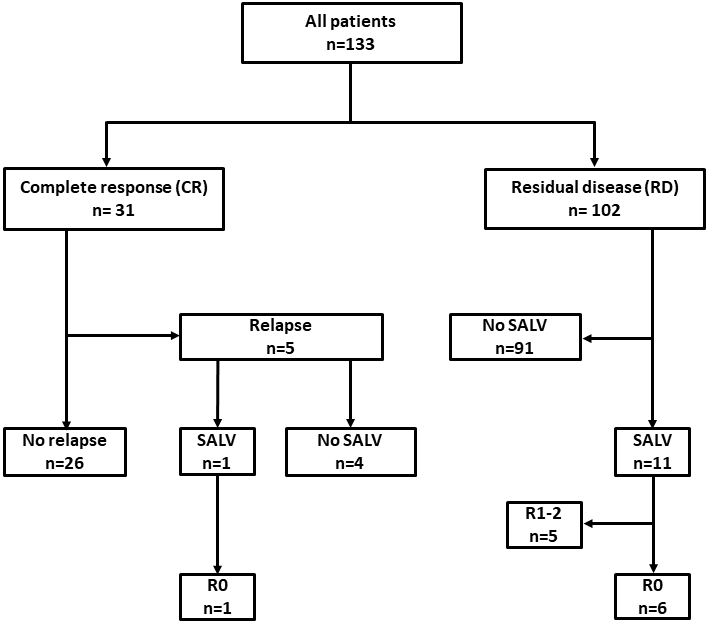 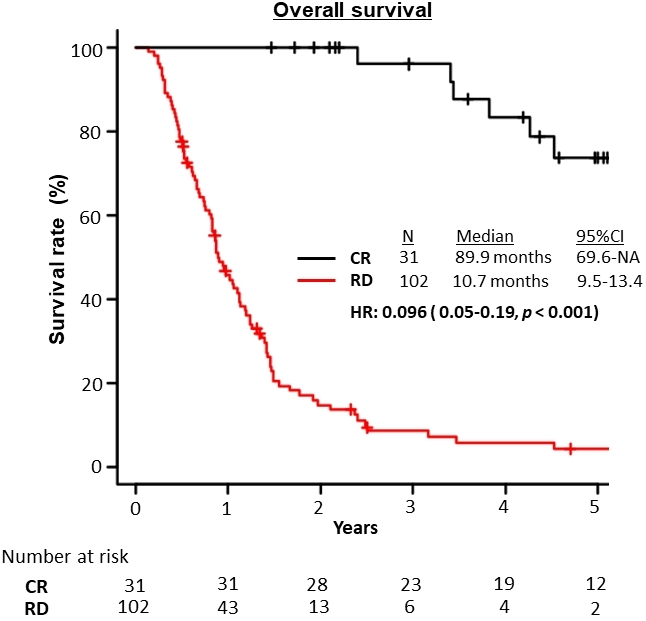 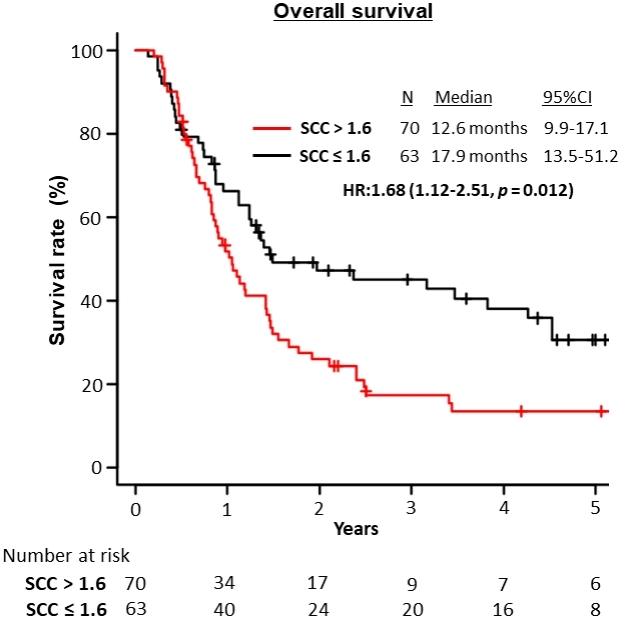 The current retrospective study evaluated treatment outcomes in a relatively large number of patients receiving dCRT for LU-ESCC, which is relevant to actual clinical practice. Importantly, our results showed that pretherapeutic serum SCC-Ag level was an independent predictor of RD, as well as poor patient survival, following dCRT. To the best of our knowledge, this has been the first study to show the clinical significance of pretherapeutic SCC-Ag level in patients receiving dCRT for LU-ESCC.

Regarding the efficacy of dCRT for LU-ESCC, Ohtsu et al.[6] had previously reported that 25% of patients with T4 ESCC achieved CR following dCRT. Meanwhile, the present study showed that dCRT for LU-ESCC promoted a CR rate of 23% - a finding consistent with that presented in a previous Japanese nationwide study wherein a CR rate of 23.1% was achieved in patients with T4 ESCC[5].

However, the absence of a distinct definition for the diagnosis of CR after dCRT has remained a problem. Fibrotic scars could increase the difficulty of accurately diagnosing the extent and depth of the tumor, as well as detecting cancer cells. Occasionally, CT findings show the presence of significant esophageal wall thickening even when no cancer cells are present. Moreover, although previous studies have suggested that endoscopic biopsy examination after dCRT could predict therapeutic responses, majority of the cases with negative biopsy results displayed residual tumor cells in their surgical specimen. Therefore, given the occasional difficulty in estimating RD or CR after dCRT, the present study also considered the duration for which no cancer treatment had been provided. Nonetheless, more well-established evaluation methods for CR should be considered.

Regarding predictive factors for patient survival, Sugawara et al.[10] identified elevated pretherapeutic protein levels as a poor predictor in 73 patients with LU-ESCC. Although the present study did not find the Glasgow prognostic score as a significant factor for survival, increased pretherapeutic serum levels (> 1.6 ng/mL) had been identified as a significant predictor of poor survival, as well as an independent predictor of RD.

Several reports have suggested the clinical significance of serum SCC-Ag levels in patients with ESCC. Accordingly, studies have shown that elevated levels of pretherapeutic serum SCC-Ag were associated with advanced tumor stage, poor response to neoadjuvant treatment, inability for curative resection, and poor prognosis[12,13,16,17]. The results presented herein also demonstrated that pretherapeutic serum SCC-Ag levels were predictive of sensitivity to dCRT given their ability to predict RD in LU-ESCC. Previous studies have suggested that SCC-Ag can protect cancer cells from apoptosis induced by irradiation, medicine, cytokine, and effector cells[18-21]. Although the mechanisms remain unclear, the biological function of SCC-Ag or tumor burden could affect the sensitivity to dCRT in ESCC.

Our data demonstrated that dCRT with FP plus irradiation with 60 Gy had insufficient efficacy for patients with LU-ESCC at high risk for RD. Therefore, alternative strategies or regimens with more vigorous antitumor activities are required to improve outcomes. Yokota et al.[24] reported feasible and promising results for chemoselection with induction docetaxel plus FP (DFP) and subsequent conversion surgery for LU-ESCC. Following such results, a randomized phase 3 study on induction DFP vs. dCRT for LU-ESCC and borderline resectable ESCC is currently ongoing in Japan[25], and the results are awaited. Meanwhile, DFP plus irradiation (DFP-RT) is also expected to improve outcomes, with a CR rate of 52.4% in patients with LU-ESCC or M1 lymph node metastasis[26]. Moreover, a recent comparative study involving advanced ESCC showed that rates of OS and CR after DFP-RT were improved compared to dCRT with FP[27]. Despite being associated with higher rates of leukopenia, DFP-RT could be a promising treatment regimen for with proper myelotoxicity management.

The current study has some limitations worth considering. First, given that this was a single-center, retrospective observational study, selection bias was inevitable. Second, although LU-ESCC diagnosis and associated decisions were determined by a multidisciplinary tumor board, no consensus on the diagnosis of LU-ESCC had been established. Indeed, inter-evaluator variations in diagnosis of locally advanced esophageal cancer have been reported[28,29]. Third, as mentioned previously, no distinct criteria for CR after dCRT had been established. Therefore, further prospective studies, including higher numbers of patients with a more accurate clinical diagnosis and more well-established evaluation methods after dCRT are required.

In conclusion, the present study found that 23% of the patients with LU-ESCC achieved CR following dCRT with FP plus irradiation with 60 Gy. Moreover, our results showed that increased pretherapeutic serum SCC-Ag levels were predictive of treatment failure and poor survival. Alternative strategies consisting of multimodality treatment modalities are required to improve the outcomes of patients with an increased level of serum SCC-Ag.

All procedures and analysis were performed in accordance with the approval of our institutional review board and the Helsinki Declaration of 1964. Consent from participants was confirmed with opt-out agreement.

All the authors gave definitive approval to publication. 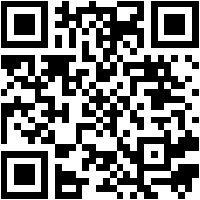